I decided to continue working with the Scimitar. In order to officially join their ranks, I had to destroy and imperial communications crystal. It was in the cave where I’ve found that group of imperial soldiers, but somehow I’ve missed it. This time, I realized each of the two portals in the base send me to a different location, so I picked the right one and found the crystal in a hidden passage. I’ve destroyed it, but not before its defences activated, making me fight two golem sentries. 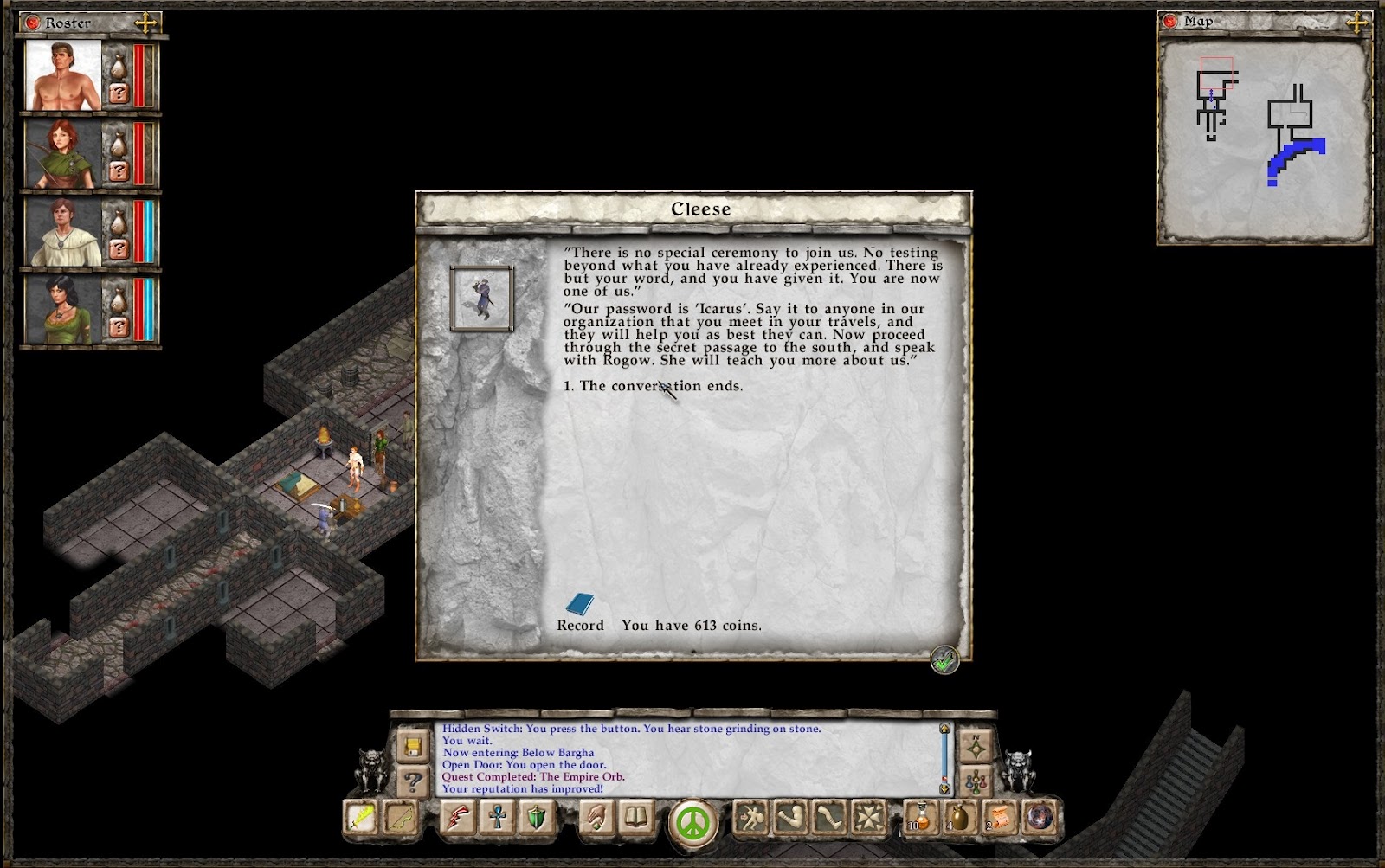 Scimitar is a new addition to the remake of Avernum, I believe.

Doing this made me an official member of the Scimitar. I could enter the base of their cell in Baghra and speak to their leader. I immediately asked about finding the exit to the surface. It seems they’ve already been working on it. They know for sure an exit exists and they know it’s located somewhere past Fort Remote. They also know it’s in imperial control, meaning I need to find a way to take that control room them. A password is involved to gain access to it, and Erika already knows at least a part of it. It seems I’m going to have to help her to be able to expect anything back. For now, I need to deal with those demons in Fort Remote.

I went there, and was soon greeted by a Haakai messenger shade. Grah-Hoth, the demon who ruled the underground, and was imprisoned by the early Avernites is back. He is influencing other demons from his prison and was the one who ordered the attack. I’ve fought back some of his lackeys and then returned to the Castle to file my report. The king was not happy. If Grah-Hoth has such powers even from his prison, then he needs to be permanently disposed of somehow. The problem is, the king is old, Erika is in exile, Rone, the king’s wizard is pretty much crazy, and the Triad is mostly scattered. I will have to find a way to do this without relying on the people who have done it in the past. 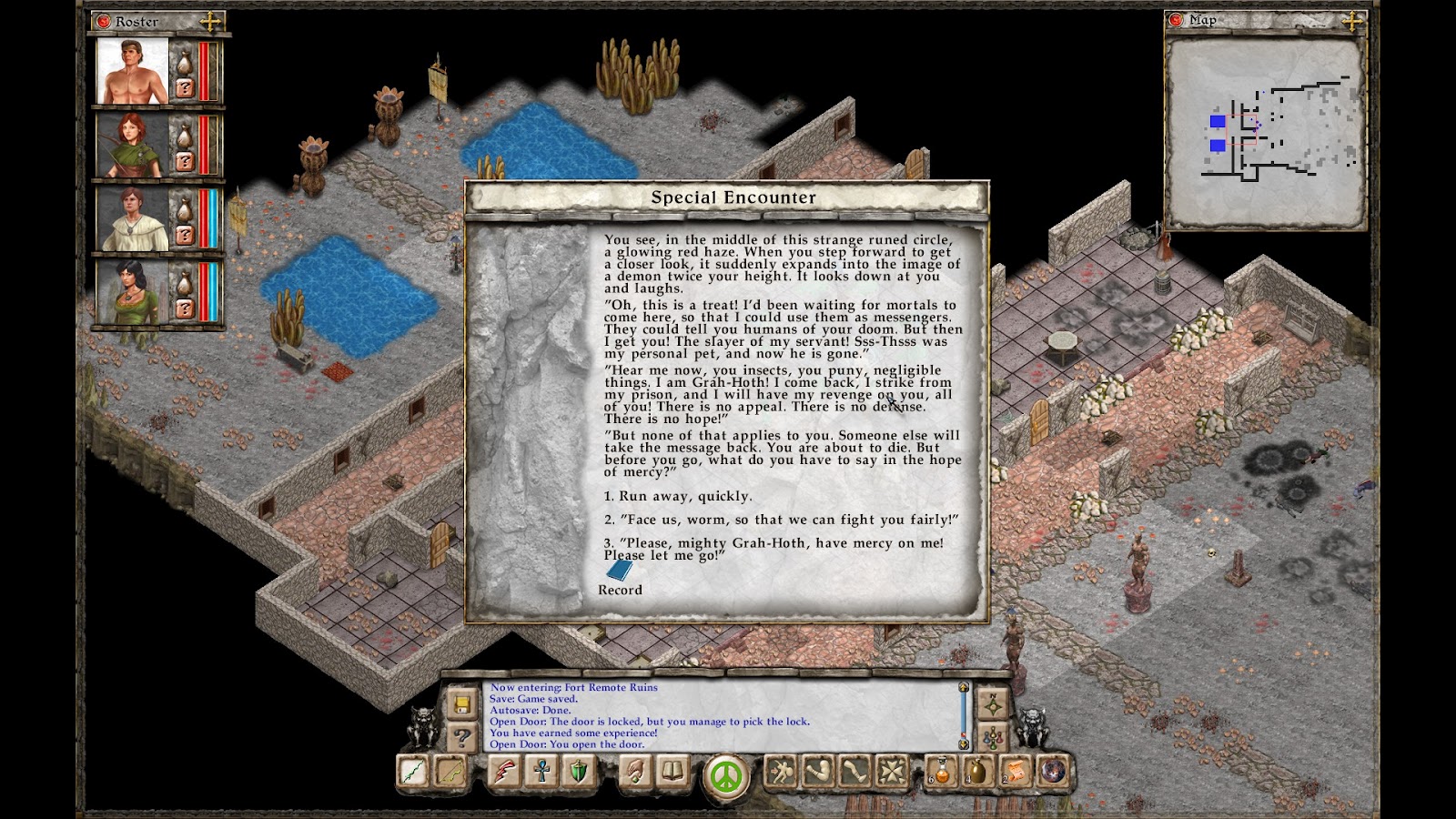 Fort Remote gets overrun quite often.

First, I needed to go explore past Fort Remote. As I was going north through the maze of passages, it was becoming more and more apparent that Imperial presence is in the area. In one of the northernmost passages, I’ve found the lair of Sulfras, one of the five dragons of Avernum. He was guarding the passage further, demanding payment. It was outrageous, really. He wants two artefacts of the First Expedition in order to let me through. Even more outrageous, he’s obviously cooperating with someone, probably the Empire, because he refuses to tell me what’s beyond the passage. I will get the two artefacts anyway, but I probably will not give them to him. As soon as I’m strong enough, he’s going down.

In the southern part of the maze, I’ve found the lair of the Chasm drake. I couldn’t say it was a very easy battle, but since I’ve delayed exploring this area for a while, it wasn’t extremely challenging. Among his loot was Smite, a legendary magical spear. Sadly, no one in my party uses spears, but I decided to take it with me as a collectible anyway. With the pass explored, I decided to check out that dragon’s lair in the Honeycomb.

The lair belonged to Arthon, a female dragon not to fond of humans. She was willing to talk, but there were no pleasantries exchanged. However, thanks to some of the damage I’ve done to the Empire, she has decided to reward me by giving me access to one of her spellbooks. After this, I went north, to explore the area where the giants lived. I used Thralni’s Orb to enter a cave beyond a huge chasm. As expected, it was an Imperial base. I killed pretty much everyone inside and found a scroll they stole from a dragon to the west. I’m guessing the dragon in question was Koth, since Sulfras had no issues with cooperating with the Empire. 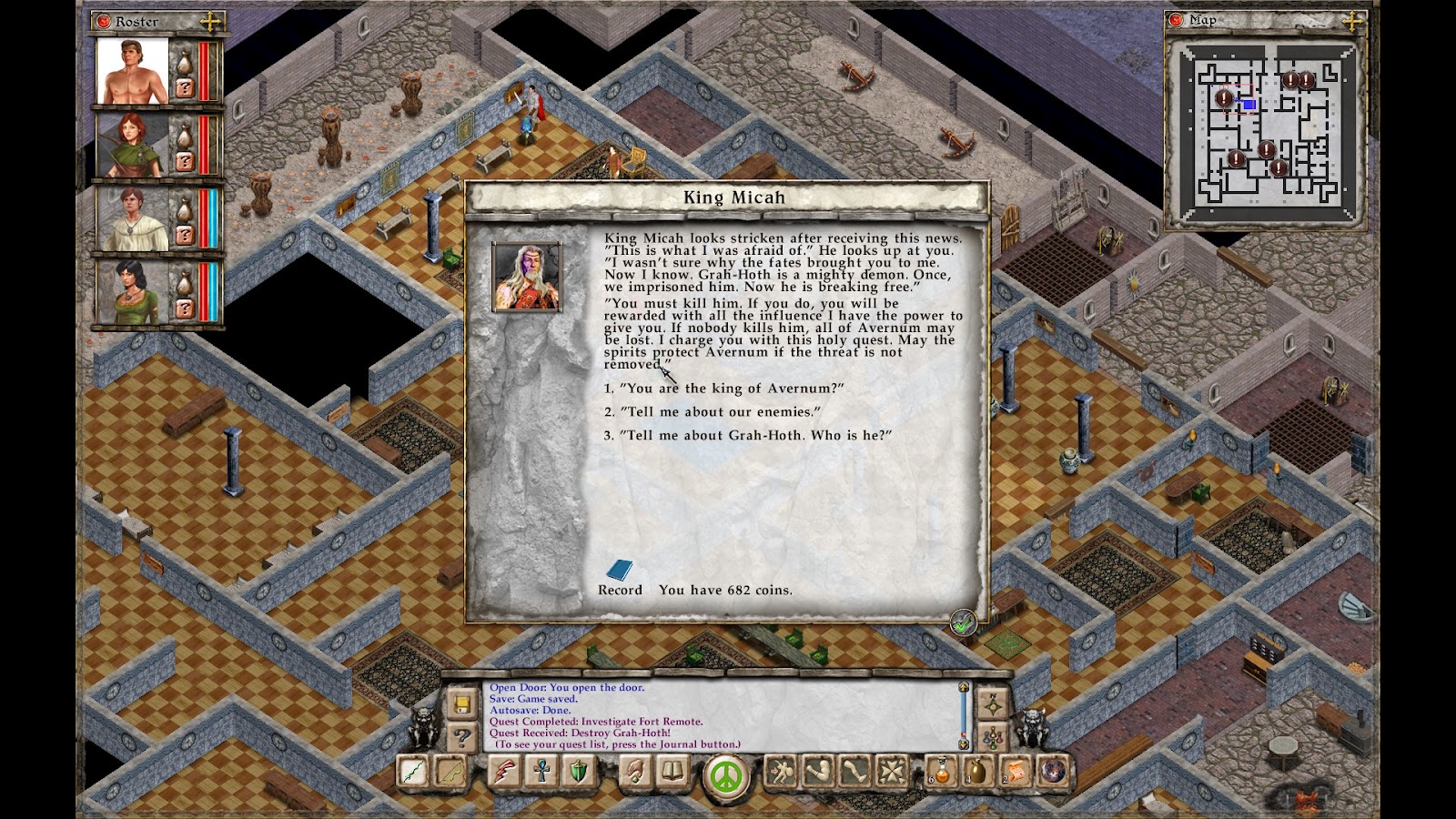 King Micah was grateful for my defeating of the Demon Lord.

I also decided to visit another dragon, Pyrog. She was a feisty one and wanted to fight me from the start. I agreed to a duel and defeated her relatively easily. For one of the rumoured stronger dragons, she wasn’t very impressive. I’ve found some stuff in her treasure, including the spellbook several people in Avernum are looking for.

The giant’s castle was next. I could only approach from the front, so I expected an ambush or a trap, and it turned out I was right. As soon as I passed the gate, the floor opened up and I feel to the level below. I didn’t let that stop me, though. I cleared room after room, climbed back up and killed the chieftain. The citizens of Baghra were happy, but not all giants followed the chieftain, so the war wasn’t really over; the battles will just be a bit easier and less frequent.