I Really am Bad at Dota 2

I’m not exaggerating here. I lose focus and rush under a tower. I die by being ambushed by the enemy while just standing there like an idiot because I was looking at something else. I accidentally use my ultimate skill or just use the completely wrong skill at the wrong time. I buy the wrong item, sell it and then buy another one. For the first few games since I came back, I didn’t even remember which buttons to push.

Somehow, I still manage to enjoy the game and avoid most of the flame the various MOBA communities are known off. How?

This should be said first and foremost. I’m not sure if it’s due to the commend/report system or something else, but I have by far the best experiences with DOTA2’s community, and this is coming from someone who has also played League of Legends and Heroes of Newerth, mind you. 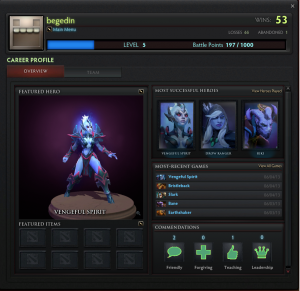 The state of my profile says it all – needs experience.

For some reason, people are more understanding and accepting. There’s even a greater chance people will defend you against an asshole. Still, flames and insults happen often, but with the right approach, you can avoid making it worse and even nip it in the bud.

How to Avoid Verbal Abuse in Dota 2

You just made a mistake and it’s definitely your fault. Alternatively, you actually did most things OK, but your team is losing and someone in your team isn’t happy about it. They’ll start placing blame, maybe on you, maybe on someone else. Here’s what the options are.

This is your worst option. In all likelihood the person won’t back down, you’ll end up fighting for the rest of the game, you’ll be annoyed and the rest of the team will have a worse experience to.

Well, you could do this, but then communication suffers and you might actually still have a chance of winning if everyone keeps their cool. This is a valid option, but use it as a last resort, when the other person just doesn’t care and you want to save your own enjoyment.

Own Up the Criticism

Yeah, I know I suck, I’m sorry. Do you have any advice on how I can improve?

I can’t remember a single time that this approach didn’t work at all. At worst, it made the rest of the team gang up on the asshole. At best, the asshole was surprised, took a step back and became the nicest guy ever, actually apologizing for their behavior.

I’m absolutely, positively serious! If someone is nasty to you in DOTA2, in my experience, the best thing you can do is to be nice back. Not nasty, NICE!

But enough about the game. Let’s talk about my game of DOTA2.

As I said, I suck. I suck big time. I’m slowly getting better, so I might eventually be decent, but I can safely say I’ll never be good. I don’t have the talent, the skill, the time or the willingness to invest it to become good. I’ll just enjoy the game for what it means to me right now – a nice dose of healthy competition for when I’m bored.

That being said, I’ve played quite a lot over the past few weeks, so I started noticing I enjoy some of the heroes more than I do others.

The Vengeful Spirit is easy to handle and play and I find myself winning a much larger percentage of games when I play as one. It’s not because I’m especially good at it, far from it. I think it’s because in low level games, almost no one ever plays the support role, so when I play that role in my team, it often ends up being the edge we need. 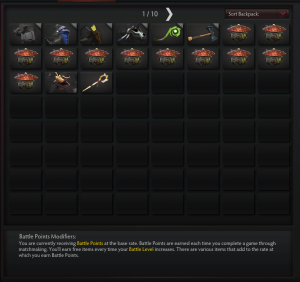 I obtained a nice number of items, but nothing for my Vengeful Spirit yet.

Suddenly, we have an early flying courier, wards in OK spots and a carry or a tank who’s able to get all the last hits and kills they need because their lane partner isn’t stealing them.

This is my other favorite, partially for the same reasons as Vengeful Spirit. Firstly, most low level players pick carries, so a tanky hero can really help. Secondly, my build makes it so I don’t need a courier for a long part of the early game, so I don’t depend on someone buying it.

Most importantly, though, Bristleback is a hero that surprises most low level players. He can take a lot of damage and he can deal a lot of damage, though it doesn’t look that way at first. Because of that, I get to play aggressively and most players don’t run away in time because they don’t know what they’re dealing with.

Other than Bristleback and Vengeful Spirit, I hardly ever play with anyone else, except when I end up in a Single Draft, Least Played or Random game. I like Tusk, Drow Ranger, Riki and a few others, but none of them as much as the above two.