And now for something a bit different. I’ve spent a few hours today trying out the alpha version of Dwelvers. A completely inadequate description of Dwelvers would be “a Dungeon Keeper clone”. It’s quite different than your average carbon copy, though.

As in Dungeon Keeper, Dwelvers takes place in an underground word consisting of square tiles. You dig out tunnels and caves, build rooms inside those caves, recruit monsters and fight other monsters and heroes. The controls are similar, you have traps and spells and you even have access to the familiar and fan-favorite possession spell.

To try a bad pun, the keeper is in the details.

First of all, there are resources other than gold (and gems). In fact, there are many more resources and an entire economy system. You dig out roots, dirt, stone, iron, gold and other things. Then you use buildings and facilities to transform these things into other things. You make alcohol, iron ingots, farm wheat and a lot of other things. 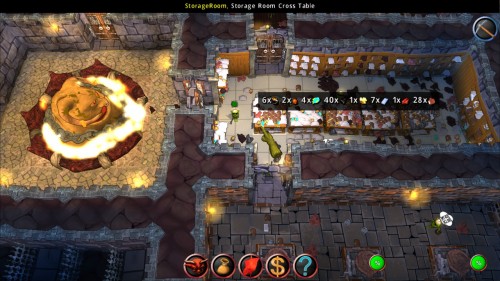 The storage room looks pretty cool, like some overflowing attic.

With those resources, you recruit creatures straight out of your dungeon heart. In Dungeon Keeper, creatures would enter your dungeon through the portal, provided you fulfilled the requirements of building a certain room of a certain size or something like that. Here, you technically still have prerequisites you need to fulfill, but they manifest more directly as resource cost. Your imps and dark dwarves each cost specific resources you need to spend to summon them.

As for rooms, in Dungeon Keeper, rooms of specific shape and size would automatically get furniture, which then influences the effectiveness of that room or is even outright required to make the room work at all. In Dwelvers, you place your own furniture. You still need to be careful and the shape of the room plays a factor, since some furniture can only be placed on walls and some actually blocks pathing, but there’s every so slightly more control placed in your own hands.

Traps also exist in Dwelvers, but they work sort of like Minecraft, meaning I fail at figuring them out. You are supposed to create a network of pressure plates, triggers and mechanisms to protect your dungeon, but I don’t even know where to begin.

The creatures are slightly different to, but that’s a difference in content more than mechanics. Besides, it’s an early version of the game, so I can’t really comment on the two creatures I managed to try out and one I had to fight.

In the category of rooms, there’s the storage room, where resources are placed. This works mostly like the gold vault of Dungeon Keeper. There is no monster lair. Monsters never seem to sleep in Dwelvers.

Then there’s the farm room, where you grow wheat used for other things. One of these things is beer which is created in the cookery or brewery, depending on the tool tip you’re looking at (as I said, it’s alpha). Beer, for now, is used to recruit dark dwarves.

There’s also the smelter, which is used to smelt iron into metal ingots, used as material for various things. Finally, there’s the bar, which I haven’t figured out. You place tables in bars and there’s the option to place chairs, but it doesn’t seem to work. I have yet to see a creature use the bar in any way.

In the few hours I’ve been playing, I have seen imps and dark dwarves on my side and goblins, or trolls or something similar I haven’t caught the name of on the opposing side. Imps are simply the builders and dark dwarves seems to be the basic fighting force. 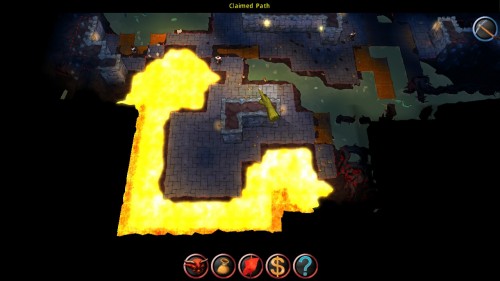 I like the look of lava. Or is it magma?

Unlike Dungeon Keeper, the rally flag isn’t a spell here, so you can use it as often as you like and I have been using them extensively to order my dwarven army around and protect the imps from goblins. At one point, I nearly lost all of my troops, but managed to lock down the core of my dungeon and rebuild the troops to fight back. For some reason, goblins do not attack doors in Dwelvers.

You can place lighting decorations, paintings and some other minor items at will, which is a nice detail and allows for more freedom on how to shape your dungeon. Some of these tools are actually important, such as doors, water wells or bridges, so it isn’t all just purely cosmetic. I found myself actually digging out a room filled with water wells close to my farm and brewery.

As I said, I haven’t really figured out traps. From what I can tell, a trap consists of placing a pressure pad and connect it via hydraulics pipes to the active part of the trap, which can be a movable wall, cannon or dynamite. You can also influence the method at which the trap triggers by placing counters, repeaters or switches along the pipes.

I’m sure it can be fun once you figure it out, but I didn’t have the patience for it.

The immediate promise the developer has made is to add a new creature called a cyclotaur into the game. This is some weird crossbreed of a cyclops and a minotaur and apparently, there will be an entire maze filled with them, led by their king. 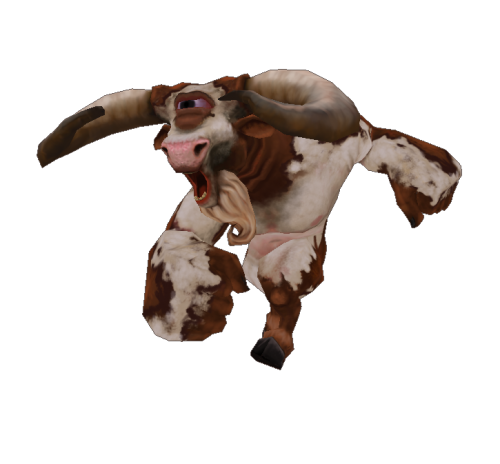 The developer is certainly creative and original.

As far as what the future brings, I’ve seen mentions of a vampire and pig goblin, creature needs that have to be satisfied, creature interaction, combat tactics and various other things.

Don’t expect to play Dwelvers through in any way. This is at most an early test demo and other than trying out the mechanics and testing your creativity with the dungeon layout and traps, there isn’t much to do. You recruit dwarves and fight goblins, eventually being forced to quit because the size of the dungeon and the amount of space you dug out causes huge performance issues. This is what happened to me after a bit over an hour, so I’ll now be waiting for the next update to see what’s new. 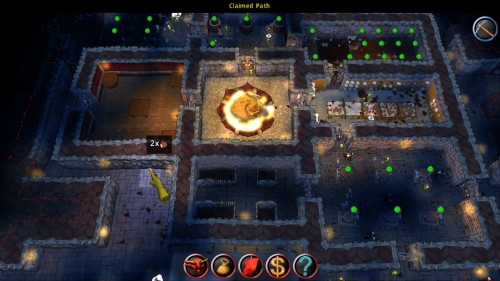 By the time my dungeon looked like this, the performance was too bad to keep playing.

Also, there are some bugs which I might take the time to inform the developer off.

I’ve been itching for a proper successor to Dungeon Keeper though and Dwelvers definitely shows promise. It’s nowhere near being close to the legend, but I  like the direction it’s facing. I’ll definitely keep track of this games’ progress and possibly even write about it some more.