Since I have trouble thinking of things to write about in action games like Mark of the Ninja, I’m writing this report as I play along. I have no idea how it will turn out, but at least it should relate to the game more.

I started at a check point and, since It’s been a few days since I last played, I died a few seconds in. There was a trap that I triggered and got shot by an arrow.

The puzzle the trap was a part of was pretty straightforward. I had to use two hiding spots to dodge the first set of arrows, pull a crank to raise a stone block and then trigger a second set of traps, now safe behind the stone block. Finally, I was able to pull the lever and get out to the surface. 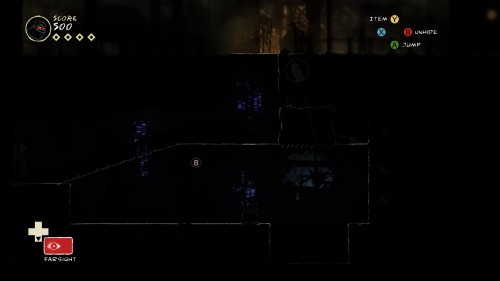 You make a plan, you execute…

This is how a lot of these traps are. To a degree, they do rely on skill, but most of it is assessing the situation and creating a plan of attack. 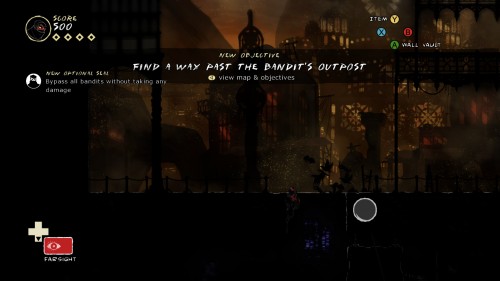 More skill is involved with the enemies, of course, but slow and methodical is still the primary approach here.

There’s no sword at the start of this mission, which is something I didn’t immediately realize. For a moment, I thought I accidentally equipped the special ninja suit I unlocked earlier.

After the section with the puzzle, there’s an enemy section which involves a secondary objective – get past them without taking any damage. It took me a few tries, but I managed, so this is the first level where I completed all three secondary objectives.

Back underground, there’s an interesting trap where you pull a lever that opens the door for you, but also triggers trap, forcing you to run away from the door first. I died twice thinking I just need to be fast enough to run through. 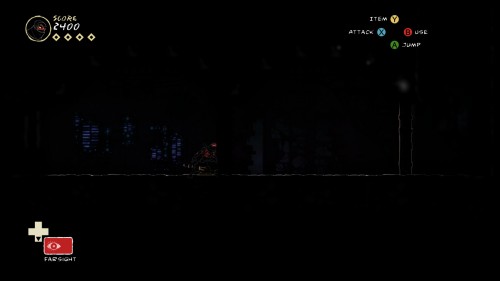 I also died one just to take this screenshot.

Finally, I died about two dozen more times before finally figuring it out – I had to use the Mark of Serenity – my new teleportation power I got after the last level. This was another thing I forgot since I last played. 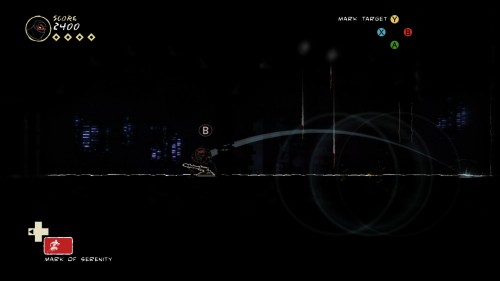 Note to self – complete level before taking a break.

The challenge room for this level also involved using the Mark of Serenity to get past certain sections and unlock a series of doors. The last part was a bit actioney – I had to use the mark to reach the scroll faster, before  the last door closed shut again.

The final section of the level involved more trapped caverns infested by the new sentinel enemies. This final part was made a bit easier by what seems to be unintended – the sentinels triggered a few of the traps and managed to kill themselves without me being involved at all. I still got the 600 points for each of those indirect kills, as the game calls them, though.

In any case, I’ve completed the level, but didn’t get my sword bad, so there’s going to be more true stealth in the next level. 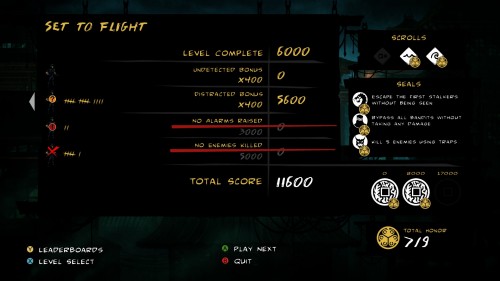 Pretty good for a late level, but not perfect.

The result? 7 out of 9 medals. I missed a scroll back in the first part and I didn’t get enough points. Oh, and the level is apparently called Set to Flight. Good to know.

I know the level name right from the start now, mostly due to writing it down and taking a screenshot. Obviously, I still don’t have a sword. Good thing I invested in all those upgrades. 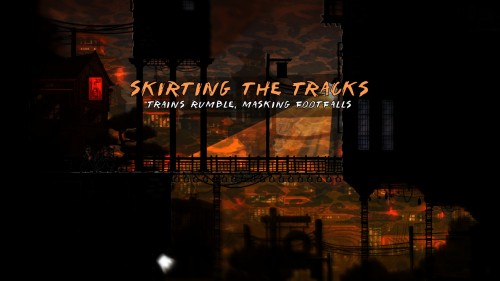 Skirting the tracks. I’m not sure what skirting means in this context, exactly.

Right of the pat, I’m introduced to a new type of puzzle. I need to use light to shine on objects, which are then triggered in some way. Mostly, it’s a stone block that disappears, but an especially cool case was where I used a reflector to shine on a wall drawing, causing it to activate and open a door. 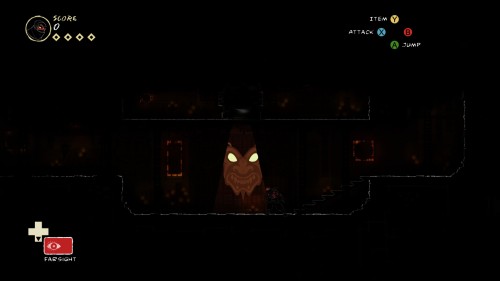 Not really a puzzle, since you’re bound to trigger it by accident, but very cool.

It feels like good game design. You’re introduced to new mechanics in a simple way through game play and then you move on to more difficult puzzles with the same mechanics. For those that can’t figure it out that way, there’s the companion who explains it to you in a slightly cryptic way, but doesn’t really take you out of playing.

I won’t say it doesn’t break immersion, because I couldn’t care less about immersion. I care about playing and it doesn’t take me out of playing – there’s no popup, no message box, just sound in the background.

Something that completely surprised me were subway trains. Apparently, the super secret ninja lair intersects with subway tracks. The mechanic here was to get through the tunnels without being killed by a train. 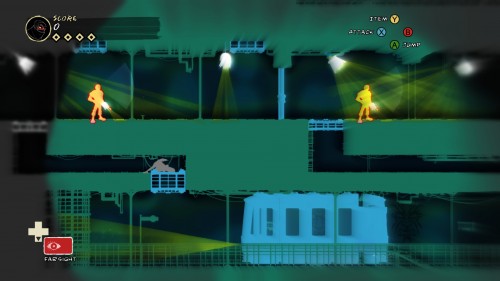 Did I mention how cool the Farsight power was?

A nice combination of mechanics was one of the light blocks blocking the way towards the secret challenge. I had to wait for the train lights to hit it, then drop down and go through before being hit by the same train. 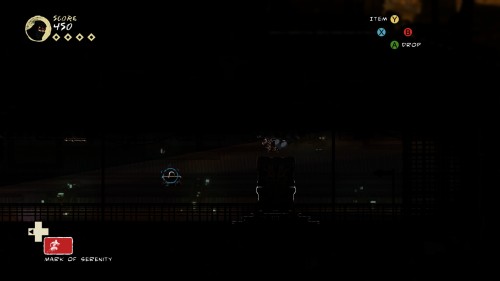 Wait for the lights, then go through as fast as you can.

Other than this, most of the level introduced nothing new. I got all the way to the end of it and met up with Azai, without even finding a single scroll, or the level challenge.

I did manage to clear two out of the three secondary objectives, but the third one, to kill three hallucinations within 15 seconds, I have no idea how to obtain. Throughout the level, I never even fought anything that could be called a hallucination – they were all just regular enemies I  met before.

Credit where credit’s due

Previously, I said the story was predictable. Well, it wasn’t now. As I got to Azai, it looked like my companion was a hallucination all along, with Azai asking me who I’m talking to. Of course, the game doesn’t make it clear, leaving me wondering. 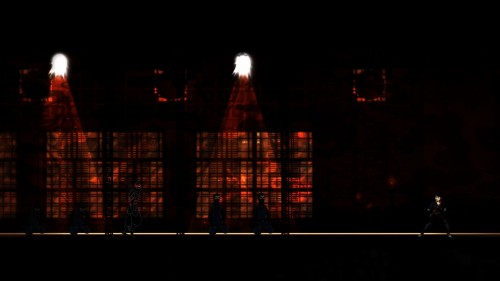 I hate and love this part simultaneously.

The final level was just me walking slowly towards the clan’s ceremonial sword, with my companion/hallucination, talking how Azai has fallen, how he deserves to die, how the entire clan deserves to die. At this point, I suspected what would happen – I would have to choose. 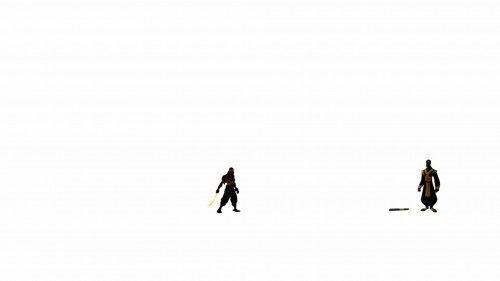 This will be my desktop wallpaper for a while.

It wasn’t really a level – it was a stage for the final choice and at no point did it become clear what the choice would be. 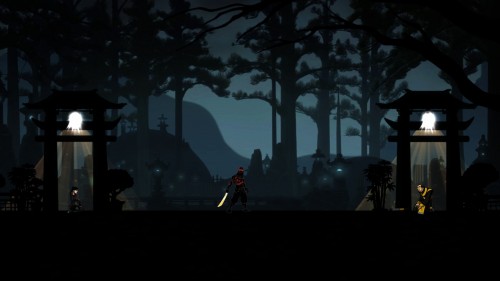 I chose the girl. Sure, she may have been a hallucination. I have a hard time believing the sentinels, the stolen equipment and everything else that happened was a hallucination.

I had to opt to kill Azai twice. Once to zoom in and once more to finally cut him down. He died and that was it. I did not get any indication it was the right choice. Shit! Awesome! SHIT!

Remember Mass Effect 3? That was a bad ending. It resolved things, but it resolved them lazily and badly. Mark of the Ninja’s ending resolved nothing. It’s an awesome ending. An ending doesn’t have to resolve everything to be good. It just has to be good.

I watched through the credits on the off-chance I’d see more. I didn’t. I did unlock the New Game Plus mode, however. I can play through the game again, except I get to keep my equipment, the levels are harder and I don’t get sound indication. Apparently, I also have a harder time seeing behind me. 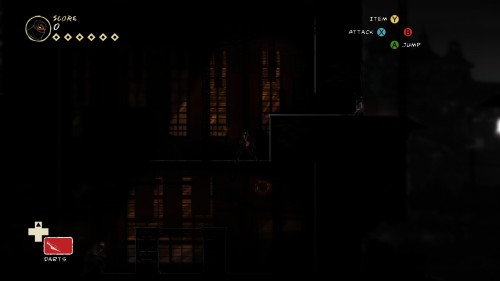 So Ora is her name then? It took completing the game for me to learn it. I’ll probably forget soon to.

I took the time to complete level 1 in this new mode. Farsight allows me to stay aware of my surrounding, so the lack of sound indicators and not being able to see behind me is completely fine. It adds difficulty, but it doesn’t make it annoyingly hard. As for tougher enemies, this basically means that if I’m discovered, I’ll probably be dead in moments.

The awesome news is, your seal progress persists, so there’s no need for one perfect level run – as long as you acquire a seal in one run, it remains clear in consecutive runs. On that note, I’ve attained all the seals on the first level now. 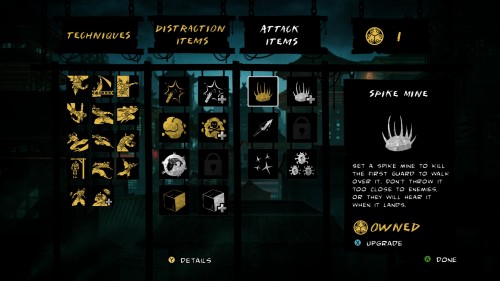 Clearing the first level full got me an extra seal to spend. I was at 8/9 on my first attempt.

I will be playing Mark of the Ninja some more in the near and probably far future. I want to see if the harder mode adds anything to how the story ends and I want to feel like a master ninja some more. It’s awesome.

To give some clue, Steam says I played the game for 10 hours. It said that before I cleared the first level of New Game Plus to, so I can safely say the time it took for me to complete the normal mode was on the low end of ten hours. I’m also at 15 out of 38 achievements unlocked. I hope to get a few more of those, but I won’t be aiming for achievements. I’m OK with just getting all the seals in the game.