Metro 2033 was a steady, but challenging progression over the fast few days. There’s a classical feel to it. It has great atmosphere and a good story, but it isn’t designed to just take you for a ride. You have to push through it.

You earn your experience.

With games like the Call of Duty franchise, you do die, but it’s never challenging to the point where you have to work for it. You die when you become careless, or when an enemy grenade gets lucky.

In Metro 2033, every enemy is a big deal and you need to constantly be careful and work for it. There have been areas, such as the one in the Nazi base (yes, there are Nazis and communists in the game) where I had to reload over a dozen times before I finally got through it. 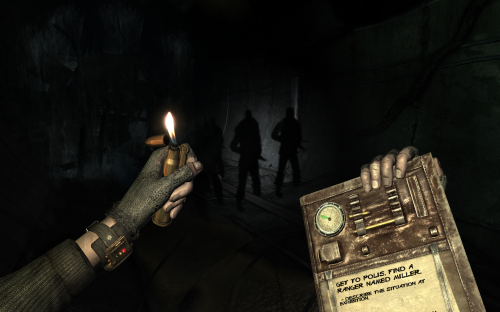 I love the shadow representation of ghosts, but I’m not sure if they’re actual ghosts or something else.

The popular notion here would be that the game is badly designed. In my opinion, if good design means all the difficulty spikes are polished an any potential hurdle’s difficulty is lowered to the point where most people can overcome it in one or two tries, then I realized I strongly dislike good design. I’ll take challenge over that any day of the week.

Sure, there’s a fine line between a challenging game and a game that’s simply bad, and it’s easy to go to the other side of it, so I get why most games aren’t like that. That doesn’t mean I have to enjoy them and be understanding of the situation.

It shouldn’t be like that. I don’t owe any developer anything. They owe me to make a game I like. It that doesn’t happen, or if I’m not their target, that’s fine, I’ll go some place else. It doesn’t mean I’m not allowed to state my opinion that their game is bad, though. I can state that opinion and I can do it as publicly as I want.

Don’t get me wrong. I find some parts of Metro 2033 tedious and the way it controls and plays isn’t completely to my preference. I just think it’s very refreshing to play an FPS that feels good and also provides challenge.

Xotic provided challenge and was fun to a degree, but it was cheap. By cheap, I don’t mean it tricked the player and achieved challenge that way. I mean it was literally cheap. It was low-budged and it was low-budget in a way that shows. You can make a low-budget game well and Xotic failed in doing that.

Metro 2033 has a budget. It’s not a blockbuster at the level of the Call of Duty games, but it’s close and it makes up for it in actual game quality, instead of just being a roller coaster ride.

Keep in mind, this is my opinion after playing through what’s probably the first third of the game, though. It might change by the time it’s all over, but for now, I’m not regretting the few hours I’ve put into Metro.

I got through the place where Bourbon was captured, but I couldn’t save him. I met another guy who sent me towards the Communist and Nazi stations, but first took me through a haunted area full of ghosts. I’m still not sure if Metro’s focus is Sci-Fi or the paranormal. 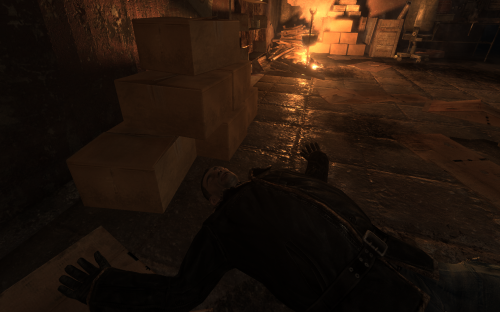 There was a station called The Armory along the way, where I bought myself an upgraded revolver which was basically a sniper-rifle, as well as a better version of my automatic riffle, with an added scope. 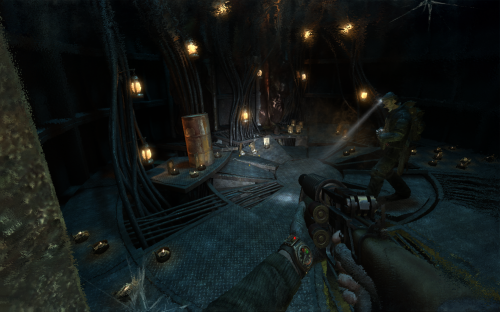 The guy that helped me after Bourbon made a shrine.

I pretend-joined the Communist station and hitched a ride during one of their attacks on the Nazi station. There, I ended up in an all-out battle, fighting both sides of the conflict. This means I died a lot and also had to reload a lot, but I never got to the point where I thought about quitting – an indicator of a properly made challenge. 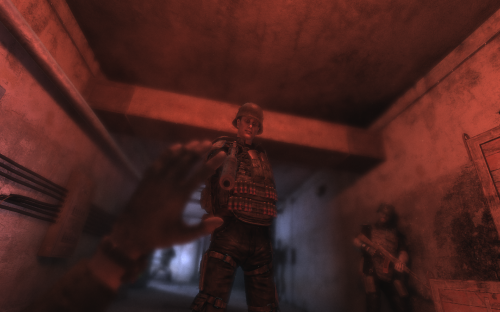 The two rangers saved me from these two Nazis. You can see one of them in the back.

I got through this part and met two rangers, who will be taking me through the next part of the game. I have to emphasize that, as soon as I met with these two, the game’s mood changed. I took it slowly and carefully during the Nazi conflict and it felt extremely dreary. As soon as I found these two, I switched from crawling to sprinting. I’m not sure if it’s the game that made it that way, or if it’s just me, but it’s something I noticed.