As I thought, the area with the next boss, Zephon, was right after the teleporter room I unlocked in the Cathedral, just before I saved my game and ended my last session. Teleporter room, you ask?

Soul Reaver has a method of navigating through the world similar to the Castlevania and Metroid series. Come to think of it, the game basically is a metroidvania. When you load your game, you start at the very beginning, but you can get to your last location relatively quickly thanks to the fact that you unlocked shorter routes by pushing blocks and hitting switches, but more importantly, because you enabled portals which take you from the portal room near the beginning to a portal room in one of several game regions. 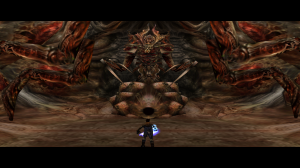 I guess “spider” was an understatement. I don’t know what that thing is.

In any case, I fought Zephon. I’d say he was even slightly easier than Melchiar, since he didn’t push me into the spectral realm even once. All I had to do was dodge his claws and hit them when they get stuck in the ground. This would cause an egg or something like that fall out of his body. I had to set the egg on fire and throw it at him. After three of this, he was down and I got a new ability – I can now climb certain walls.

With a new ability, it was time to get new stuff, so that’s what I did. Sadly, I couldn’t find anything decent in the Cathedral, but I distinctly remember there being some health upgrades in Melchiar’s area, so I went there. I also decided to go check out the entrance to the Cathedral but the one health upgrade on the tall cliff next to the shore was still unreachable. 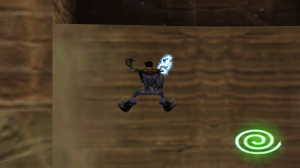 The walls which can be climbed with the new ability are clearly marked.

I was going to get a few more upgrades I vaguely remembered previously seeing, but I ended up taking a route which I thought would take me to a secret area, but actually took me to the next region of the game. I’m not sure what this new region is called, but it contains a skull of some giant creature. I ended up climbing right to the very top of the area, where another block puzzle was waiting for me.

The objective was to first flip all of the blocks to their correct orientation and then push them into their respective slots on a large fresco (check me out, I’m using smart words!). The puzzle alone was not hard to figure out, but my problem was finding the last two blocks in the lower area of the room, where the statue was.  I found the first block in one of the corners of the room, but the second one was nowhere to be seen. After some walking about, I finally found it in the previous room, on top of a balcony.

It turns out this wasn’t a new area, though. Solving the puzzle “just” gave me a brand new spell. Oh, and by the way, the spells in this game are actually called glyphs. This one was the stone glyph. 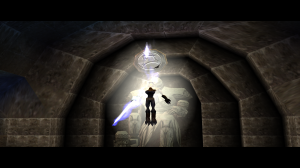 I solved the puzzle, but I can’t yet say it was worth it.

What happened next was that I made a huge mistake. I went outside the stone glyph area and figured out I had to glide to my next destination, but I missed the jump and ended up all the way back at the bottom, next to the giant skull. It took me about fifteen minutes to get back up there, mostly due to the difficult jumps I needed to do half way through.

Eventually, I got back up there and this time used the camera and jumping in place to look around for a bit, before I made another attempt at jumping. I found the right spot and ended up right next to another portal room. This is where I saved the game.

Also, I didn’t get the chance to try out the stone glyph yet, so I have no idea what it does.