After getting my now abilities to pass through barred gates, I spent about thirty minutes exploring every place I’ve already been to and I’d say it was worth it. I got a total of four health pieces, meaning I need only one before I get an actual health upgrade. I also got my first spell, which is something I completely forgot exists in this game. The spell basically knocks back everything around me, which doesn’t seem extremely useful at first, but if I’m next to a body of water and surrounded by enemies, it becomes extremely useful. 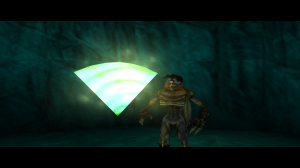 I got a few of these.

Eventually, I got tired of the exploration, so I went to the Sanctuary, which was the huge locked building half way between the huge whirlpool and the Elder God’s lair. To enter, I had to use my new ability, but other than that, the area was pretty straightforward. Soon enough, I got to the throne room surrounded by the corrupted Pillars of Nosgoth, where Kain was waiting. There was a short conversation where Kain basically hinted he knows something Raziel doesn’t and then the fight started. 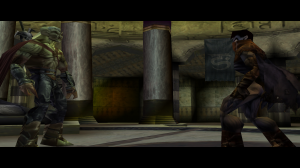 Again, I love the voice-overs in this game. They are of extremely high quality.

One hit from Kain was enough to push me into the spirit realm, so I had to be really quick on my feet. He did manage to “kill” me a few times before I landed my third hit on him, but once I did, the fight was over and, through a series of events, I got hold of the Soul Reaver, both in its material and spiritual form. It only appears in the material plane when my health is full, so thanks to my skillful play, this basically means I don’t have it most of the time, but it makes the spiritual realm extremely easy, so getting killed is now just a minor nuisance.

With Kain gone, for now, it was time to go to the next area of Soul Reaver – The Silenced Cathedral

“Once a testament to mankind’s defiance of Kain’s empire, this towering cathedral now stood derelict, the humans who worshiped here, dead for centuries. Its architects conceived this tower as a holy weapon against the vampire menace, a colossal instrument of brass and stone. The cathedral’s pipes, once tuned to blast a deadly hymn, now stood silent, and these vacant spaces whistled their impotence.“

The Silenced Cathedral used to belong to humans, but is now under the occupation of the Zephonim – the clan following the vampire Zephon. I haven’t seen Zephon yet, but I’m guessing he’s some sort of a spider, since his vampires look and sound very much like spiders. They can climb walls, use webbing and have a tendency to respawn quite frequently, which I found extremely annoying. 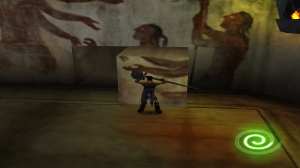 Lot’s of puzzles like this one in the Cathedral.

The region consisted of several huge areas with puzzles mostly involving climbing and activating various machines to create air flows which allowed me to get to higher-up areas. Probably the hardest one was near the end, where I had to find, get to and activate three different valves and fix three pipes before I made the air flow strong enough to lift me up to the main area of the Cathedral. 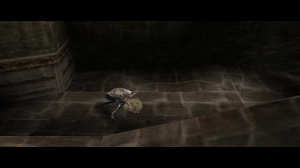 Also a lot of enemies like this one in the Cathedral

Once there, I had to break the shielding on four more switches, activate those and then do some other thing I can’t remember right now, because this is about where I stopped playing. What I do remember is that there were three block puzzles where I was constantly being interrupted by enemy respawns, as well as a couple of secret areas where I found more health pieces. Yes, this means I got my health upgrade.

I also had to fight some human enemies, which I’m guessing are vampire worshipers, since I can’t think of any other explanation on why they would be there. In any case, human enemies just mean free health, so I wasn’t bothered by that.