I know the title of this posting is a major spoiler so I’ll get right to it. I’ve completed Legacy of Kain: Soul Reaver. Bear with me, though. I’d still like to write about it. 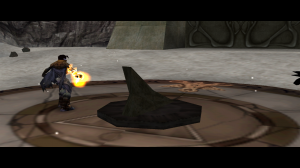 I had to use my new ability to turn the sun dial and open the passage.

I didn’t really feel like exploring anymore, so I went right for the next area after killing Dumah. I remembered there was a fork in the path next to the last portal I activated, so I went back there and took it. 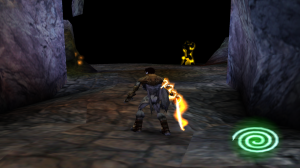 The walls might be ice or snow, but I’m not sure.

I basically had from room through room, connected with extremely long hallways and with a relatively straightforward puzzle in each one. One of them involved pushing blocks to open a door, another involved leavers or using force projectile to push blocks, etc.

The slightly annoying part was fighting a lot of those Morlock enemies. The developers apparently have a sick sense of humor, because they absolutely love placing them in blind spots, so they’d hit me, causing me to lose the Soul Reaver and face them without a weapon. What I ended up doing was just to ignore most of them and run past them.

Eventually, I got to a part that was even more linear. I just walked through a large hallway, interrupted by flashbacks of the past story events. Eventually, those flashbacks turned into premonitions, or hallucinations, Raizel was unsure about that. Finally, I got to the last room of the game, where I had to face Kain again.

The Second Battle with Kain

The second battle with Kain worked basically in the same way as the first one, except it was much harder, or easier, depending on how you look at it. Again, I had to hit him three times before he would hit me and teleport away. 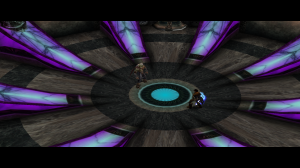 The method to beat Kain is the same as the first battle, but it’s harder this time.

The part that was easier was that a single hit didn’t send me to the spectral realm this time. Instead, I could get through two or even three hits. The harder part was that he started out much further away from me, and with each hit, the distance increased. By the third hit, I wasn’t able to do it in time.

It took me about fifteen minutes of trying before I finally got to him in time and hit him for the last time. To be fair, I did spend a big part of those fifteen minutes trying to figure out the underlying mechanic and somehow trick the game my predicting where he would appear next. Eventually, I gave up on that and just got lucky enough to be facing the side of the room where he appeared.

This might be a major spoiler, though I personally don’t think so. The game ends with a cliffhanger. I’m not saying the story isn’t complete, I’m saying the game literally shows you a black screen with “To Be Continued” written on it. 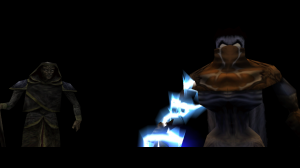 This is where the game ends. I’m not gonna tell you who the other guy is.

Now that I think of it, Defiance has Raziel chasing Kain to, so it’s quite possible the story stretches all the way to that game, which means it doesn’t end during the two games in-between.

In any case, Soul Reaver is completed. I think Soul Reaver 2 is next, or possibly Blood Omen 2. I need to check. Alternatively, I could also try the first game in the series – Blood Omen: Legacy of Kain. I never did play through that one.

Is Legacy of Kain: Soul Reaver Any Good?

Yes, yes it is. In fact, it’s an excellent game. It has graphics which haven’t aged to badly, fun and engaging mechanics, amazing music, sounds, atmosphere and voice acting and an extremely intriguing story.

The downside? Well, I guess the camera could use some work. Heck, it could use a lot of work. The thing is, this was a 90s game. Back then, the camera in most third person games needed a lot of work. It was a new concept. I can forgive a slightly annoying camera if everything else is great.

You should play Soul Reaver. You really should.