As promised, the first thing I did when I booted up The Soul Reaver again was to go exploring. Last time, I got the final Sun Glyph and I can now reliably say that I can cast it three times before I’m finally out of mana. This time, I got an upgrade that’s even more awesome than the Sun Glyph.

I went back to the Drowning Abbey. The first location I visited there was the huge cave lake with a stranded ship. I used my new swimming ability to get to a plateau on one side of it which, after a lot of swimming finally lead me to a mana upgrade.

After that, I moved on to the room where the annoying platforming section starts. This time, I could swim instead of switching to the spectral realm, so I was able to destroy the stained glass door in the middle of the large room. This opened another set of passages infested with the swimming enemies. Once I finally got to the end of it (without dying, even), I entered a room with a large brazier. 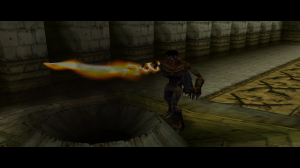 I finally got the Fire Reaver, and I almost missed it!

Using my Soul Reaver on the brazier turned it onto the Fire Reaver. This version of the sword burns enemies and turns my force projectiles into fire projectiles, enabling me to outright kill enemies at a distance, after a few hits. I lose the upgrade every time I enter water, but now that I have it, I can get it back at any larger fire source in the game, meaning all of those bonfires and braziers I used to kill enemies are now even more useful.

After getting the Fire Reaver, I continued my exploration and eventually got to the early rooms of the Malchia clan area. I remembered there was a sunken passage there which apparently lead to a dead end in the spectral realm. Now that I could swim and look around, it turned out there was actually a way to get through it, which lead me to a large area decorated with fire emblems. 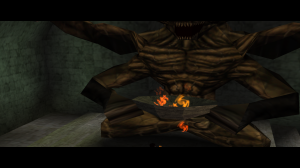 I got the Fire Glyph to. Just one more Glyph left.

There was a puzzle there which I had to solve. It involved turning a crank to open a door, switching to the spectral realm to get through that door and then opening up a bunch of shortcuts which allowed me to get to an area with an altar without leaving the physical realm. Once I got to that point, I set my Soul Reaver on fire and used it to activate the altar, which unlocked the Fire Glyph. This meant I only have one more glyph left.

I explored some more, but I didn’t find anything of note, so I finally went to the next area – The Ash Village.

To get to the Ash Village, I first had to go back to the Lake of the Dead, the large whirlpool at the beginning of the game. From there, I could now take the last available route by jumping out of the water and climbing the ledge. The route soon took me to the entrance of the Ash Village, where I immediately found and unlocked the portal. 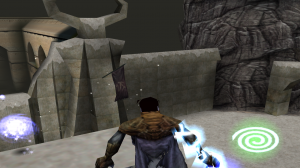 The Ash Village, or the Ruined City, looked like a hub at first.

The Ash Village looked huge, with a lot of twisting passages and puzzles which involved pushing blocks and switches to open up new routes, allowing me to more freely navigate through the area. Close to the end of it, I had a huge scare which took me back to the early days of the blog, when I encountered a game breaking bug in Legacy of Kain: Defiance.

I Can’t Push the Lever in Ash Village!

I climbed to the top of a large room, where I was supposed to flick a lever. The problem was, no matter what I did, Raziel wouldn’t touch the lever, just swinging his sword instead. I couldn’t damage myself in any way and the method of getting there meant I always had full health one I was on the lever platform. 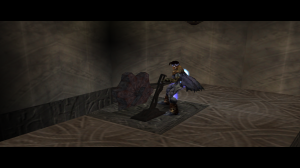 I had to reload my game to finally push the lever – a nasty bug.

I googled for a bit and other people had the same problem, but most of them ended up fixing theirs at random. Luckily, the same happened to me. I saved and quit the game, and then immediately reloaded. I walked back to the room, which didn’t take long thanks to all the shortcuts I unlocked and I was finally able to flick the lever by standing with my back towards the wall.

This was pretty much the final puzzle I needed to solve, before I could fight the boss.

How to Kill Dumah

My brother, Dumah – a powerful warrior, in life. He would have burned with shame, to have me find him here like a stuck pig.

You don’t really kill Dumah, just like you don’t really kill Rahab. Instead, once I got the three spears out of his body, I started running away from him, all the while making sure he stays on me and keeps following. I lead him through the entire area and into the huge room with the gas valve I previously triggered to blast open the door. 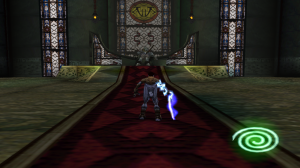 I had to revive Dumah in order to kill him and get his soul.

Once I got him into the room, I activated the valves again and basically incinerated him. Killing him gave me my next ability, which sort of tells me the developers were running out of ideas at this point.

Dumah’s ability allows me to create some sort of energy by running in circles around objects and enemies. This energy then allows me to trigger and move objects I can’t otherwise and hurt enemies, I guess. I’m not really sure about the enemies’ part, since I didn’t get the chance (or the desire) to try it out that way.

What I did was to go to a nearby courtyard with a statue and switch it around to clear out three surrounding rooms. Two of them just contained enemies, but one actually had another health upgrades. However, I need three more before my health goes up, so I won’t be getting any benefit from that for a while yet.