Last time in Pokemon Platinum, I got to Eterna City and saved my game. Aipom, Turtwig and Pikachu were ready for the gym and I already caught a Buizel to replace Aipom once Gardenia’s Gym was beaten.

Eterna Gym would have been easy if I could have used Chimchar, but since Ash was being an idiot in the anime, I had to be an idiot to. Luckily, Pikachu knows Iron Tail, so at least I had some advantage, for a while. I beat the gym, got HM01 Cut and was able to tackle the Team Galactic building, finally. 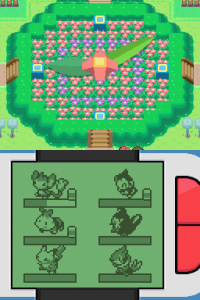 Whoever says the graphics in Pokemon didn’t improve is a liar.

I know you’re supposed to figure out the correct route to get directly to the boss, Commander Jupiter, but I decided to clear the whole place for the experience. The boss actually managed to beat me twice, so I ended up going back to Eterna Forest to clear the Old Chateau and get some experience there. Clearing the haunted house was more than enough to beat the annoying Skunktank and finally move on. The next part is something I had to google, so it gets a title of its own.

You get at the southern exit of Eterna City, from professor Rowan’s aide. He’s in the building that connects the Cycling Road to Eterna City and he gives it to you if your Pokedex contains at least 30 (I believe) seen Pokemon. So you don’t have to catch thirty, just see them. 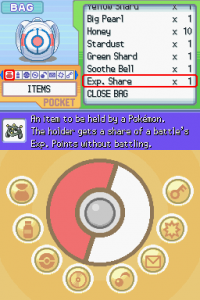 I’m not sure why I haven’t used Exp. Share before. It makes no sense not to if it’s available.

I decided to take the Exp. Share and use it to avoid annoyingly grinding Buizel. While I was at it, I also dropped of Aipom at the Pokemon Center, since it belongs to Dawn now, and I got the Bicycle from the store owner, whom I rescued from the Team Galactic building.

Also, I forgot to mention that Cynthia came by when I got the gym badge and gave me an egg to carry. I accepted the egg, just for kicks, but whatever hatches, which I think is a Togepi, I won’t be using.

Above and Below the Cycling Road

Next up was the Cycling Road. There wasn’t much to do on top of it other than fighting lots of trainers, which I naturally did. Once I got through it and healed up at Oreburgh City, it was time to go below the Cycling Road, onto Route 206 and into the Wayward Cave. 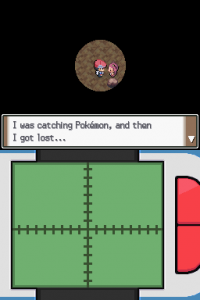 I hate the concept of Flash. It’s a useless move that you’re forced to use.

I went to the correct entrance first and went all the way through the area without Flash, primarily because I thought that’s where I can catch my Gible. Of course, that ended up being completely wrong. I got some items, guided Mira to the exit and got some experience, but overall, I don’t think it was worth the time or the annoyance. Here comes another heading because I had trouble with it.

Where to Catch a Gible

The Wayward Cave has two entrances. One is visible, while the other’s view is obstructed by the Cycling Road. This secret entrance leads to a Cycling Course in the basement level of the Wayward Cave, where Gibles are actually quite common. This is where you catch one, not in that hellhole of the ground level. You don’t even need flash. 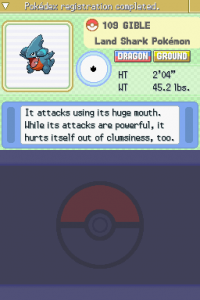 Gible grows in to an amazing Pokemon, as long as Ash doesn’t have anything to do with it.

Next up, I went to Route 207 and into Mt. Coronet, where I met Cyrus again. Then I got through and to the other side, where I remembered I need to go back to Route 206, below the Cycling Road, to catch a Gligar. I went all the way back (so annoying), grinded for a bit (even more annoying) but eventually, I caught one. This means one thing. 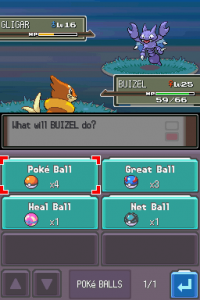 There will be no more catching Pokemon in Pokemon Platinum. I got every single one of my team mates, so now it’s just a matter of getting to a point where I can start using them. Gligar will be in my team for now and Gible will replace him eventually, though with a slight delay.

I got back through Mt. Coronet, through Route 208 and finally got to Hearthome City, where I saved my game. Now I have to beat three gyms without any of my Pokemon evolving. I saved my game and that was it for now.