When I arrived to Kva, I decided to do some catching up first. I got some minor info around town and it turns out the dragon has issues again, but with actual titans this time. He even got wounded, so he needs my help more than ever. While I was running around, I also did some quick side quests, which got me experience and money, but nothing of note other than that. My companion has left me a note saying he will be looking for his attackers in the White Plains, but before I went there, I had to go and speak to the dragon. He explained how he was attacked and injured and requested my group to lead an army of Avadon to destroy the titans in their stronghold to the south.

Before I went to the White Plains to find my companion, the staff working for the dragon asked me to “evict” some unwelcome residents of the lower caves. Among the many I had to “send away” was a drake who deluded itself into thinking he is the dragon’s equal partner. White Plains it is.

Lots and lots of cacti in the White Plains. And lizards, lizards to. Oh, and brigands, being bad and ambushing people, forgetting cacti have thorns. Some wolves to. Basically, there’s plenty of stuff in the White Plains. Pretty soon I’ve found a small settlement in the south, Called Debptbound Colony, so I decided to ask around there. One of the people there told me what the place was. In her words, holes like this one serve to house people that have far to much debt to pay back. It’s either that, or slavery, according to the Code. In one of the other huts, I’ve found Sevilin. That’s his name! Sevilin! 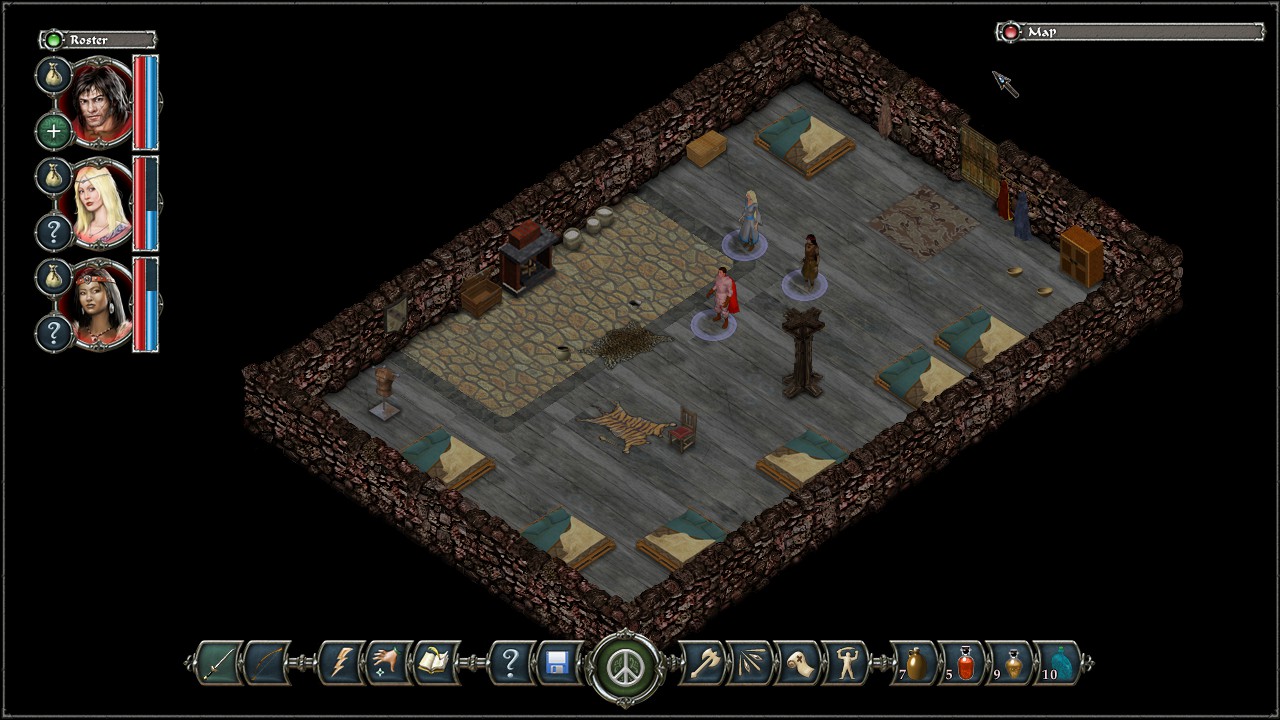 Outside of Avadon, people tend to live in group housing.

Sevilin tracked Cahil, the brigand who ambushed his party, to this place. He is back with me now, and we will hunt the bastard together. After much “diplomacy”, I’ve finally convinced one of the people living there to tell us where we can find Cahil, or “The Claw” as they call him. I’ve filled up as much of the map as I can and then went after him. We found him pretty soon to, but not before we had to dispose of a reanimated titan. After a brief conversation and the realization who it is that was hunting him, Cahil started babbling about something “we can’t know” and then slipped away from us through a trap door. We went after him, of course.

After traversing a maze of trap doors and hallways, we’ve finally cornered him in his lair, but then he slapped his final card on the desk. A letter of pardon from Redbeard himself. The Claw gave information to Avadon and, in spite of killing several hands and committing other horrible crimes, he was allowed to walk. I chose to ignore it. If Avadon has no honor, then I will not serve it blindly. His archers fell in moments, and he followed shortly after.

I have no idea what this means, but I’m sure it will affect the events to follow. For now, I have a mission for Avadon to do.