I approached the fort from the secret entrance on the southern wall. The ground floor was easy to clear, apart from the main room. Technically, I could have avoided the fight against the majority of the slith force in the main room, but I decided to clear them anyway. The throne room was on the second floor. Again, it was quite simple to clear. The fight against Ssss-Thsss was challenging, but not too challenging. I looted his corpse, got his mark of leadership as proof of kill and return to the castle.

As I was leaving the throne room for my well-deserved break, someone barged in saying Fort Remote was attacked by demons. Me being the most appropriate for the task, I was immediately sent on this mission. However, as it’s been made apparent by now, I don’t prioritize well. I decided to go to the Freehold of Kyass first, for some investigating.

The Freehold of Kyass is, unsurprisingly, run by a guy named Kyass. He basically proclaimed the untamed north the sovereign territory of this new state and wants nothing else but to be left in peace. It’s really hard for me to pick sides on this. On one hand, it would be hypocritical for Avernum to not tolerate another state, seeing how Empire was acting this exact way on the surface. On the other hand, underground resources are severely limited as it is. Sharing them between two different nations would not be a good thing. In any case, I gathered some intelligence, helped with some minor issues to gain trust, and then returned to the castle. 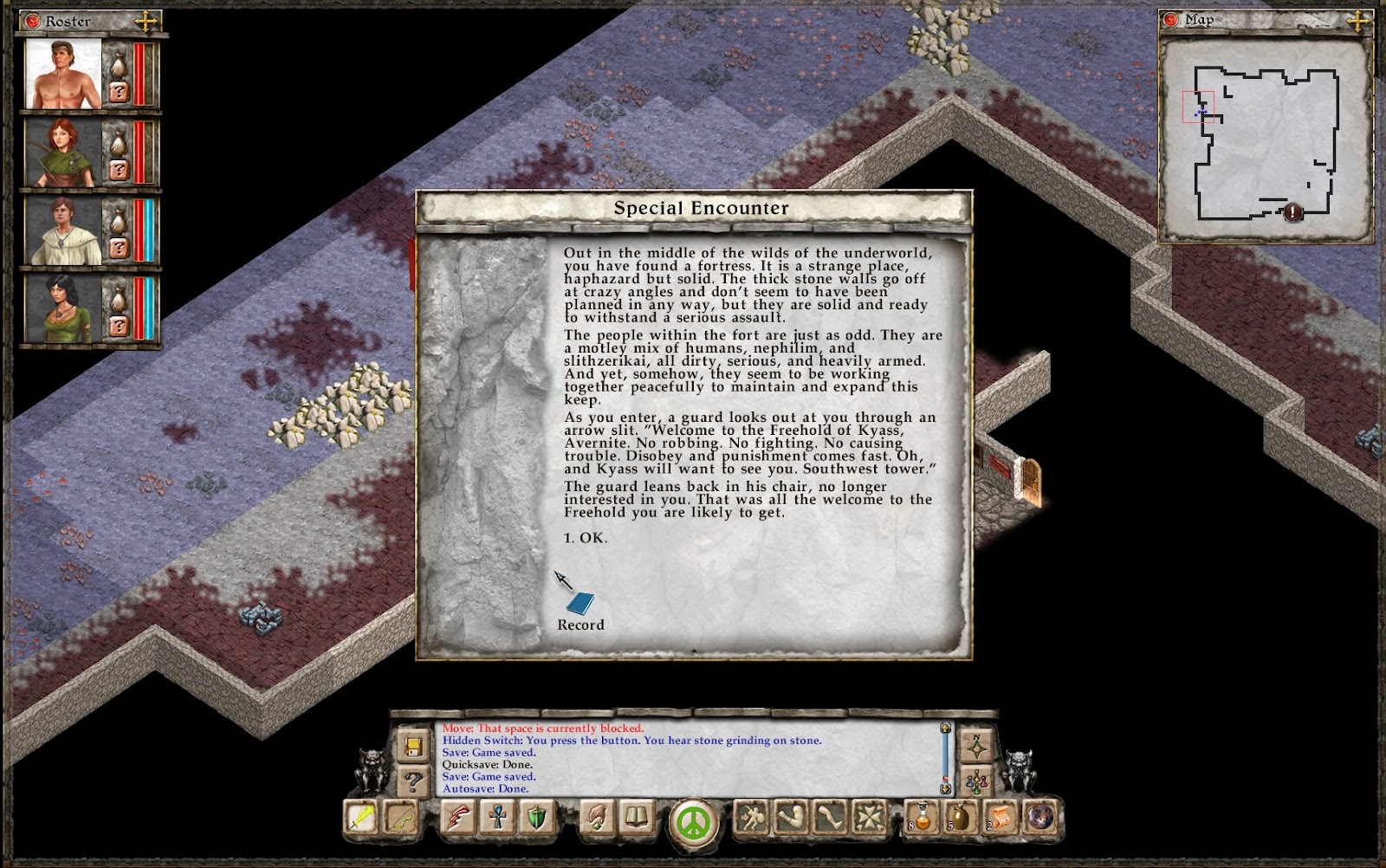 I don’t remember the Freehold of Kyass being in the first Avernum, or Exile, so it might be a new thing added to the remake.

During all of this, I went to explore the drake cave near the Slitzerikai fortress that I skipped earlier. It turns out it isn’t really a drake cave. Two thirds to the north were actually occupied by an ancient crypt, and haunted by another lich. The thing is, the undead here weren’t human before they died. One of the friendly spirits there told me they are Vahnatai, an ancient, nearly extinct race of humanoids living in the deeper caves.

I returned to the Great Cave, and then moved to the area near the Tower of Magi, to deal with their ogre issue. It was easy, as expected, since I’ve been delaying this mission for a while now. After that, I decided to pay a visit to the Abyss, since I had a few delivery jobs to complete in that area. The first town to reach was Spire. Spire is the bad city of the Abyss. It’s basically run by criminals, with Meena, their mayor, being the biggest one. There was an arena there, however, so I managed to become champion while I was there. The final fight was a bit lengthy, but not really too hard.

Baghra is the good town of the Abyss, so it really sucks Avernum isn’t at all helping them with their giant problem. By giant problem, I don’t mean big problem, I mean literally giants. They are constantly being attacked by giants from the west and Avernum has done nothing to help them with the fight. I decided to take it into my own hands, but I don’t think I’m ready for it yet.

After completing some minor tasks, I went on to fully explore the area. There were a few minor events here and there, some fights of various difficulties, but eventually, I managed to explore most of the area. More importantly, I’ve found Erika’s tower. To gain an audience, I had to go through a testing ground, with both mental and physical challenges. Eventually, I’ve found her quarters.

She’s a cold and calculated person with a large amount of hate for the Empire. She’s also very direct, almost instantly making her intentions known. She wants revenge on the Empire, the emperor and his right-hand wizard Garzahd, who cursed her with her affliction. If the sun would ever to touch her skin again, it would burn her instantly. The curse cannot be removed, so even if Avernites one day do find an exit from the caves, she can never leave. 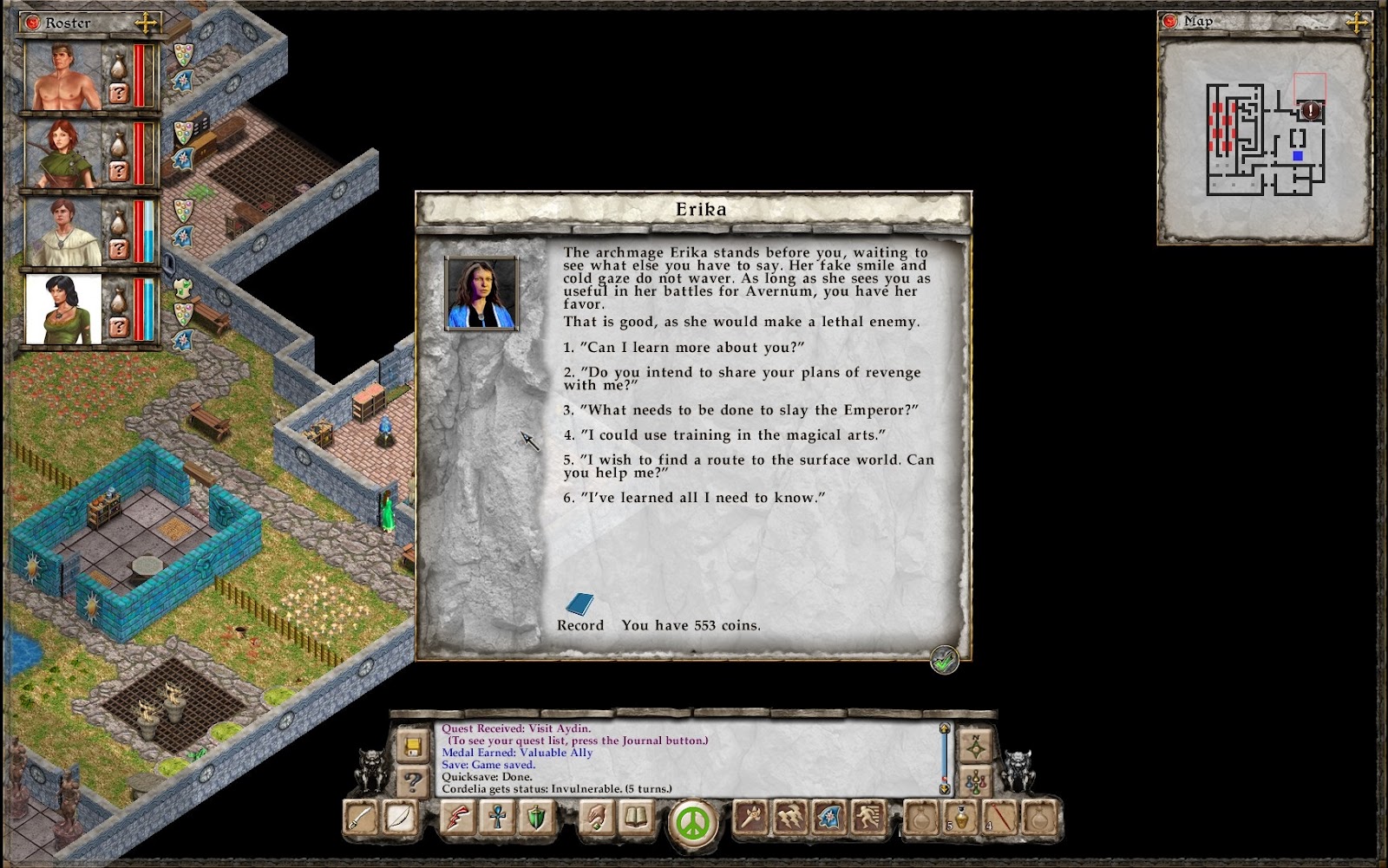 The archmage Erika is a major character in Avernum’s lore.

She wants to assassinate Hawthorne, but not just for petty revenge. The emperor is paranoid and psychotic. Anyone would rule better in his place. Hearing her reasoning, I agreed to let her use me. In order to kill the emperor, we need a portal to the surface, to some place near him, preferably. There’s a man named Ayden somewhere on the islands north of her tower. He knows the location of such a portal, as well as the rituals needed to use it. I’ve also spoken to her about other things. She agreed to teach me magic, for a price. I made use of this immediately, learning a couple of very powerful mage spells. I also asked about the possibility of finding a physical route to the surface. She said this was possible, but I’d better off working with the Scimitar group on this matter. I’ve already met their members in Baghra, and I’m in the process of joining them, so I’ll get to that later. I explored the rest of her tower and activated a transport pylon in the southeast corner. It was time to leave.