I was back outside in Gothic now, so It was time to get my gear ready for the final confrontation, while Xardas was figuring out how to fix Uriziel.

I Searched for Xardas’ Old Place

Xardas told me to go east and I was pretty sure where that east was. Back when I raided that harpy infested ruin with Lester, there was a lake nearby, where the tip of a crumbled tower was visible. I jumped down, hoping I’d find something, but I never did. Obviously, I managed to miss it.

I went back there and I looked harder this time. After swimming around aimlessly for a while, I finally realized there’s an underwater tunnel reachable from within the crumbled ruin. After diving for a while, the tunnel twisted back upwards and I was in a cave filled with zombies.

I’m not sure if these zombies were as strong as the one from the shrine I raided with Milten, but they sure looked the same. Still, they were worth 200 experience each, so I’m thinking they’re weaker versions. 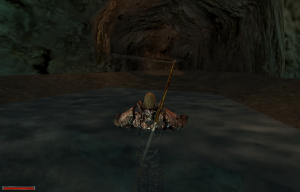 Finding Xarda’s tower reminded me how crappy swimming in Gothic is.

In any case, I explored the small cave, found two rooms and a bunch of potions in both of them. That wasn’t the important part, though. The important part was that the chests I’ve found in there contained a teleportation rune to the Fire Mage tower and more importantly, one of them contained the ancient ore armor. This armor was an upgrade in every area and it looked pretty cool, so I immediately put it on. It was now time to teleport back to Xardas. 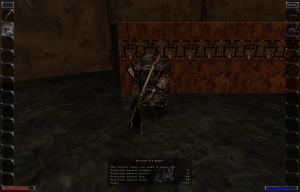 Xardas told me he figured out how to restore Uriziel. I need to get myself a magician, point the sword at the New Camp ore mound and have the magician recite a spell. Since I had no idea where to get the magician (Xardas didn’t volunteer), I just teleported to Saturas to see what’s up.

Milten was waiting right next to Saturas. I asked him to talk to me in private, so we went to a nearby library. I (as in, the Protagonist, without my choice in the matter) asked him to help me with Uriziel and he agreed. We very slowly went down to the ore mound and he there was a video sequence where the two of us restored the sword with Saturas and the gang getting there just in time to witness it. 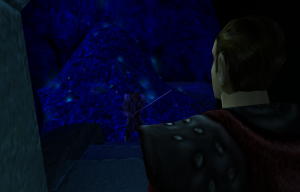 I needed a magician, so Milton sufficed.

Milten told me to teleport straight outside, so I did and left him behind. Since I’m pretty sure he’s back in Gothic 2, he obviously survived Saturas’ wrath somehow. Not me, though. As soon as I appeared at Xardas’ tower, I saved my game and tried out the Water Mage rune. I appeared in Saturas’ room, got frozen and was basically electrocuted to death without being able to move. Fighting water magicians sucks. 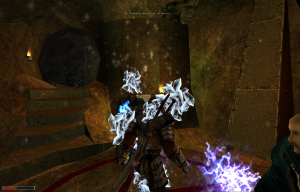 The lesson here is not to mess with water magicians.

I had the sword now, but before going back to the temple, I decided to use the Fire Magician rune I got from Xarda’s old tower. I appeared at the Old Camp and started clearing it out. I’m not sure if it’s Uriziel or something else, but I didn’t have to do the execution sequence on any of the guards and named NPCs there, so that was a definite plus. 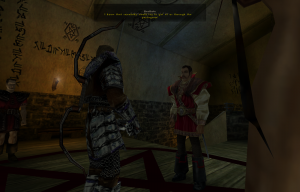 This guy was the first of many to fall.

Eventually, I got to Gomez and easily killed him, as well as most other guards and NPCs. Scar gave me a nice one handed sword upgrade, but I didn’t start using it until a bit later. I explored the rest of the inner ring and found Stone, the blacksmith, in the dungeon. To reward me for freeing him, he further upgraded my already awesome armor, which was, you guessed it, awesome! Now I was ready! 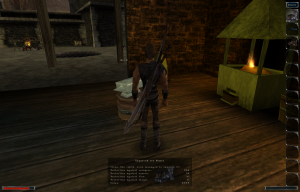 I Completed the Game

I got back to the temple and committed genocide upon the orcs on the surface. I’m serious here. I didn’t feel like equipping the Ulu-Mulu, so I just ended up killing everything. Only the final group of shaman gave me trouble. No other orc could even touch me. I used a telekinesis scroll to get the statue from the shrine, used it to open the gate and got back inside the temple.

I drank a velocity potion to get to the area with the fifth shaman faster and promptly killed him with Uriziel. He was still bugged, so he never touched me. I was hoping I’ll be able to switch to Scar’s Sword after that, but pretty much every enemy from this point onward was only vulnerable to Uriziel, so I wasn’t able to. I used the five weapons I got by killing the shamans an opened the way into the inner area. 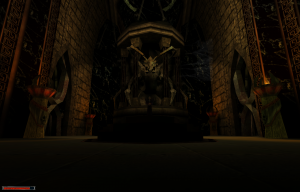 Xardas somehow met me in there and told me what I needed to do to get rid of the Sleeper. I first followed a long hallway to the final chamber, but then I decided to go back and see if I missed anything. It was worth it! 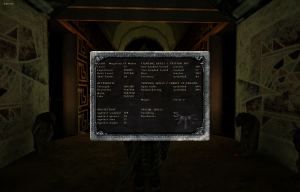 Twice as strong within minutes.

The two small back rooms from where I met Xardas contained a chest each with some healing and mana potions, as well as six mummified bodies with a bunch of stat increasing potions on each of them. Alltogether, I got about 80 strength, around 50 or so dexterity, close to 150 health and probably even more mana from it. Basically, from these two rooms, I nearly doubled my power.

I got rid of the Sleeper

Finally, I entered the Sleeper’s room, killed Cor Kalom and his disciples and then started the painful and annoying process of getting rid of the Sleeper. The platform he was on was surrounded by five containers with a shaman’s heart in each of them. I had to dodge the Sleeper’s fireballs, open the container and stab the heart with one of the swords. 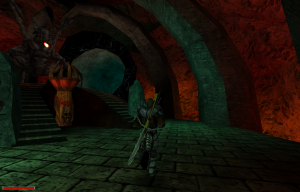 The final fight wasn’t really a fight, just a series of switches.

Doing so with each would summon a demon lord, so I then had to lure it back up the stairs, kill it there, heal up and go back to the next heart. Once the fifth heart was finally dead, there was a video sequence and the game was over. I didn’t even get back to the main menu. I pressed escape on the credits screen and the game threw me out to the desktop.

I have to say, for such a great game, the ending is underwhelming. It does give me an itch to play the sequel, though. Soon enough!