Last time in Pokemon Platinum, I played for about ten minutes at night, just to level Gligar to Gliscor. What I didn’t mention in the edit of my last article, though, was that I also allowed the game to troll me a bit while I was at it. You see, there is a guard at the entrance to Canalave City. When you talk to him, he says he’s thirsty. 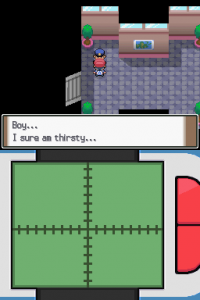 Pokemon veterans know what happened here. I went back to the Veilstone department store and bought one of each of the three drinks from the vending machines at the top floor, hoping I could give it to the guard. Turns out, I can’t. What the guard says is just flavor. That’s about five minutes of my time “wasted”.

The Steel Gym of Canalave City

In any case, when I started my proper session today, I went for the Canalave gym, but before I could enter it, I nearly got my ass kicked by Barry, or Gary, which is how I named him for some strange reason. I really should start thinking more when I’m starting the game. Gary certainly isn’t Ash’s rival during the Sinnoh seasons. I barely beat him, with only one Pokemon left conscious, so it was clear I was severely underleveled now.

Where to get HM04 Strength in Pokemon Platinum?

Luckily, I had a chance to do some training by going to the nearby Iron Islands before challenging the gym. The Iron Islands are where you get the HM Strength in Platinum as well as a place where you get some extra items and a lot of extra experience. It’s a cave filled with mostly rock types and Golbats, with some Steelixes near the bottom. About half way through, you can get a companion so at that point, training is extremely easy. I got everyone except Buizel close to 40 before I got out. With this added experience, the Steel gym was much easier to beat, mostly thanks to my Chimchar and his newly learned Flamethrower move. 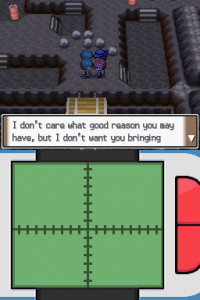 Team Galactic was also at the Iron Island cave.

The Pokemon that really took the victory, though, was Gliscor. Byron’s last Pokemon was Bastiodon and he swept through both Buizel and Chimchar with ease. Since Ash only used those two and Gliscor, it was basically up to Gliscor, even though it was doing barely any damage to Bastiodon. For some reason, though, Bastion outright stopped doing damage to me, using mostly Taunt and Metal Defense until the battle was over. It took me a while and I nearly ran out of PP, but eventually, I burned through the Full Restores and the large amount of health Bastiodon had. 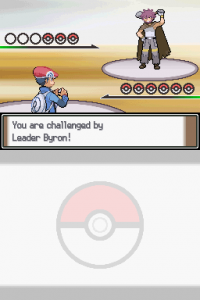 Byron is actually Roark’s father. Makes since, since both names are awesome.

Next up, I needed to visit the three lakes to deal with Team Galactic. Lake Valor was first and there, I beat Commander Saturn with relative ease. After that, it was Lake Verity, where I fought Commander Mars again. Finally, I needed to go north to Lake Acuity, but I never went there before, so it was a lengthy trip. Since I now beat the sixth gym, I used the opportunity to evolve Staravia to Staraptor, which means an Everstone freed up, so I gave it to Buizel.

The Ice Gym of Snowpoint City

Before I could reach Lake Acuity, I had to get to Snowpoint Gym to get the badge which unlocks the usage of Rock Climb in the wild, so that’s where I went next. I gained a few more levels on the way north, so it wasn’t too hard to beat the ice types in the gym, mostly thanks to my new Staraptor. Abomasnow was the only one of Candice’s Pokemon that gave me any trouble, but I dealt with it via some item usage. 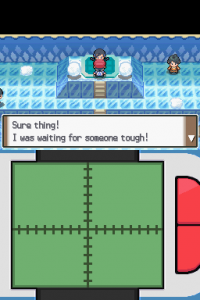 Ice gym means there will be sliding puzzles.

This means I now have a total of seven badges and I’m finally ready to go to Lake Acuity. Next time in Pokemon Platinum, I intend to get to the League.

Where to get HM08 Rock Climb in Pokemon Platinum?

By the way, I got HM08 Rock Climb completely randomly, by stumbling into it on Route 217. It was on the western side of the route, slightly behind one of the houses there, as a regular item pickup. I’m glad I ran into it because I would have hated going back and getting it after Snowpoint.