Last time, I got all the way to Hearthome City, got invited to the Contest hall and then I saved and quit the game. I also managed to catch all the Pokemon Ash caught in Sinnoh, though I can’t use one of them yet.

This time, I gave the Hearthome Gym a shot. In the anime, Ash gave his new Buizel a chance to shine, but also used Chimchar and Pikachu in the battle. The gym type was Psychic this time and the trainer in charge was Fantima. Her trainers weren’t giving me much trouble, but I had she managed to beat me several times before I finally got her. I even grinded for a level or two. 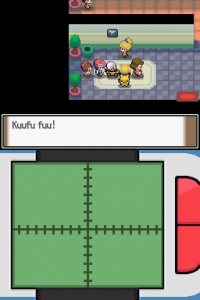 If your child produces this sound, it’s time to see the doctor.

Beating her gave me the ability to use the Defog HM in the field, but I didn’t have it yet. All I could do was to move on to the next city, to that’s what I did. Before I got to Solaceon Town, though, I paid a visit to the Lost Tower, which is the Pokemon graveyard of Platinum. I got all the way to the top, only to find out I needed Defog to get the prize. 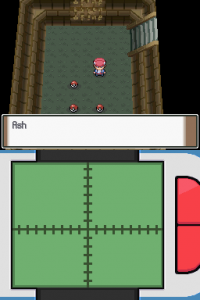 The Solaceon Ruins are basically a maze of stairs.

Finally, I got to Solaceon Town and then went to the Solaceon Ruins, where I got Defog, as well as a Thunderstone, a Fire Stone and a Water Stone. I also fought a bunch of Unkowns, but I didn’t even try to catch any. During all of this, Buizel started trying to evolve so I’ll probably edit my save and give it an Everstone before my next session.

I got back to the lost tower to get the prize -some held items. Finally, I moved on and after a lengthy route and a lot of trainer battles, I finally got to Veilstone City, where a fighting gym was waiting for me.

A couple of annoyances here. First of all, I had to use Staravia, Chimchar and Buizel. Chimhar was behind in levels by now, and Buizel wasn’t that tough either way. Staravia had the type advantage, but the issue here is, I have yet to see a flying Pokemon which is actually tough and can handle more than two or three hits, and Staravia is no exception. 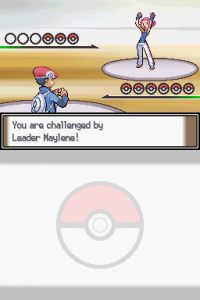 Maylene is tiny, but tough.

Basically, Maylene’s Lucario was kicking my ass, hard. It would easily one shot both Chimchar and Buizel and even kill Staravia before I could harm it enough. That’s just the first annoyance, though. An even bigger annoyance is that, in order to get to Maylene, I have to go through a lengthy sequence of puzzles. I had to do this every time, on every single one of my attempts, meaning every failure was more annoying and tedious than the last one.

I ended up getting Staravia up to around level 35 before I finally managed to beat this gym. During my training, I got all the way south to the Valor Lakefront and even beaten most of the trainers there. Eventually, though, the badge was mine. 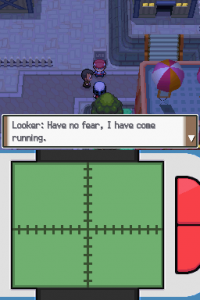 Looker is constantly late to the party.

About five minutes later, another awesome thing was mine. I stormed the local Team Galactic warehouse and got my favorite HM – Fly. I can now go anywhere, but my next stop is Pastoria City.