Pokemon Platinum is hard! This is something that absolutely needs to be said. Cynthia, the League Champion of this game, actually has all of her Pokemon around level 60. Level 60!

You Need to Evolve in Pokemon Platinum

Suffice to say, I had to do a lot of training. This time, I actually used the Exp. Share for training as well, hoping to get Gible to a high enough level so he’d be useful, for once, but even at level 50, I did not get a chance to use it properly. In fact, even Pikachu was for the most part useless, not to mention Buizel. Maybe it’s just my imagination, but the stat gap between unevolved and fully evolved Pokemon in Pokemon Platinum seems to be far bigger than in the previous games. My level 55 Pikachu had about 130 HP, while my Torterra reached 200 with a lower level. 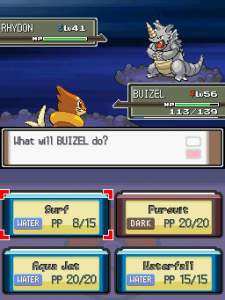 Thanks to Surf, Buizel was easy to train at the Victory Road.

Aaron and Bertha Are Easy

It didn’t take long before I was consistently able to beat Aaron, the first of the Elite Four and a bug user. Once Infernape got to the mid-50s, it could sweep through Aaron’s entire team. Soon after that, I could also sweep through Bertha, a Rock user. My Torterra was able to handle it, but I was also able to use Buizel here, once its speed got high enough to make it act first in battle. Before that, though, a single hit, even with a type resistance, would often nearly kill it.

If You Can Get Through Flint, You Have a Chance

Flint, a Fire user was the first hurdle I needed to get through. He was also the one I couldn’t get through until I got Buizel to the high 50s. Once I managed to do that, I was able to sweep through his three weaker Pokemon. His Magmortar and Houndoom gave me trouble, though, Magmortar far more so. I really couldn’t find a way to beat it without abusing items. 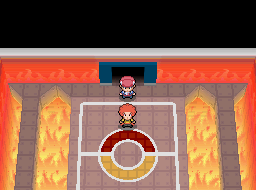 I finally beat you, you bastard!

Once I got through Flint, Lucian was relatively easy. I didn’t really have a proper type advantage against any of his Pokemon, but by using Flame Blitz, I could still sweep through most of them, thanks to Psychic Pokemon having low physical defense.

Finally, I got to Cynthia and by this point, I decided to win it, no matter what. Most of my Pokemon got close to or even beyond level 60 thanks to my many failed attempts, so I was able to survive a hit or two on occasion. I used these opportunities to generously throw items at my team, mostly Revives and Hyper Potions. 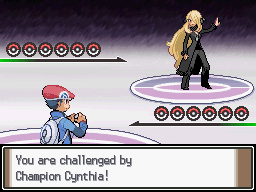 I think Cynthia is my favorite Champion.

Cynthia’s Milotic and Garchomp and Togekiss gave me the most trouble, in that order. The other three, I basically one-shoted, but these guys burned through almost my entire Potion and Revive supply. I pretty much had to wait until their strongest moves ran out of PP before I could even act. Once they did, though, that was it. I won!

Yes, it was cheap. I threw money and items at the League instead of winning it by grinding. I can live with that. Grinding is simultaneously my most- and least favorite part of Pokemon, depending on my mood and the general situation. In this instance, I just fought random battles for so long already, I didn’t feel like doing it any more. It’s not like playing for a couple of more hours would somehow made me more skillful or smarter, I just wouldn’t need as many potions.

It looks like I lied. I didn’t get even close to the 60s with most of my team. My memory is bad.

In any case, there’s only one generation left, and this one will be tough to incorporate into the challenge. As far as I understand it, the anime didn’t get to the League yet and we already have two games for the generation, with a next generation game (Pokemon X & Y) already announced. I’ll see what I can do. I might just go with Black 2 or White 2, since it technically is an upgrade of the first two, kind of like Platinum was an upgrade for Diamond and Pearl, etc. Sure, the story is a bit different, but it’s no more or less true to the anime. Right?