With the choice of my next game in the “follow Ash” Pokemon challenge being between Pokemon Diamond, Pearl and Platinum, I decided to go with Platinum, mostly because I’m assuming it’s the most polished and full-featured of the three. As with Pokemon Ruby, I decided to do the research beforehand and make a proper plan of attack.

Ash’s Pokemon in the Sinnoh Region

Other than Pikachu, Ash primarily uses six (or seven, depending on how you look at it) other Pokemon. These are

The Starly, Turtwig and Chimchar line are heavily used and Ash gets all three of these before the first gym. He also brings in Aipom from his earlier journey during the Johto Battle Frontier. He then trades his Aipom for Dawn’s Buizel between the second and third gym which is also heavily used from that point on.

Other than these three, he catches a Gliger, which soon evolves into Gliscor, but is also left behind in a similar fashion to Charizard sometime after the seventh gym. Additionally, he catches a Gible, but barely uses it and it doesn’t evolve.

This means I’ll end up with a Staraptor, Torterra, Infernape, Pikachu and Buizel as my final team in the Sinnoh League, called Lily of the Valley Championship, or something like that, by the way.

The procedure is simple. I’ll edit my save to start with Pikachu and Aipom, while also Picking Turtwig. Right after the beginning, before I get to Oreburgh, I’ll catch a Starly and add a Chimchar to my party as well. Basically, I’ll have all the members of my team before the first gym and replace one of them right after the second gym. After the seventh gym, I’ll go below the cycling road to catch a Gible and I might train it for a bit, but I don’t think I’ll be using it to much. 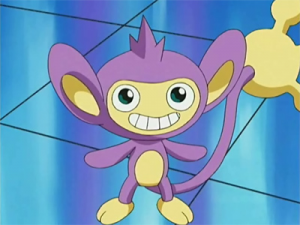 I think Aipom is the first Pokemon Ash trades away for good.

This time, I’ll also try to only use the moves the Pokemon in the anime learn after evolving to their proper forms. This might feel unclear, but I’ll explain it in the following paragraphs.

I already gave up on Tackle, Leer, Double Edge, ThunderShock and Agility from the previous games, so I won’t even try to learn these. Thunder, Thunderbolt, Quick Attack and Iron Tail carry over from the previous games, but I’ll probably lose Thunder in favor of Volt Tackle. I think Pikachu only learns Electro Ball in Black and White, so I’ll have none of that.

Also, I will rearrange his individual and effort values in this game, since I feel they were all wrong in Ruby.

Starly evolves to Staravia before the first gym, which is awesome. Once it evolves, it learns Aerial Ace and Brave Bird, so I wont even try using it before that. I will learn it, of course, but I wont use it if I can avoid it. Sadly, I’m going to need Fly, so I’ll sacrifice a move slot for that. Once it evolves into Staraptor, it finally learns Close Combat. 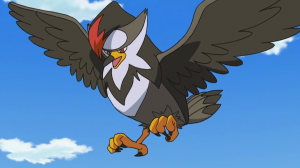 Staravia evolves to Staraptor between the Canavale and the Snowpoint Gym.

Rock Climb is a HM in platinum, which means I don’t lose a slot to it for once. Other than that, Turtwig’s move list in the anime doesn’t fit with the game very much, so I’ll have to be creative. It learns Rock Climb after evolving to Grotle and Leaf Storm only in its final form.

I’ll pick this one as my starter. It evolves after Pastoria for the first time and right before Sunnyshore for the second time.

This is sort of sucky, because he’s only able to use a fighting move after evolving to Monferno, which happens after the seventh gym, but it’s still a pretty awesome fire type, so I’ll deal with it. He will use Flare Blitz only as Infernape, and I’ll probably have to sacrifice a slot for Rock Smash.

It’s supposed to join my team before the first Gym. It evolves twice, both after the Snowpoint Gym, which is gym number 7.

These are the four moves Aipom knows while with Ash, but I’m not sure I’ll even be able to learn all four before abandoning it in favor of Buizel. Aipom will be with me only until after the Eterna Gym. 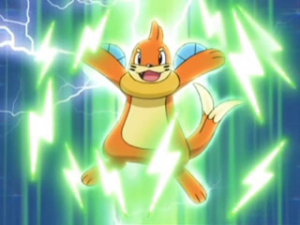 Buizel will be simple to handle, once I give it an Everstone.

This one will be straightforward, since it doesn’t evolve. I’ll pick three out of these five moves and add Surf to the list. I might have to sacrifice another slot for Waterfall to.

He only uses the first three attacks as Gliger, so I’ll hold on with the rest of them until after it evolves. I’ll have to abandon it after the Snowpoint Gym, sadly. I’m supposed to catch it right after Eterna and let it evolve sometime after Pastoria.

Gible evolves into an awesome Pokemon, but sadly, this doesn’t happen in the anime. Instead, even though Ash actually catches it, unlike Larvitar, it remains heavily underused (i.e. not at all) in battles. I’ll catch it and keep it in my party, but I probably won’t train it at all. 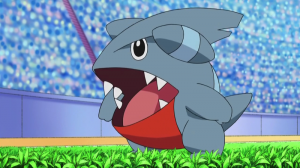 This one has a huge amount of potential, but it never reaches it in the anime.

Then again, Ash does use it in the League battles, so I might have to train it anyway.

How is it Overall?

Well, on the positive side, I won’t need to make any hard choices on which Pokemon to use in Pokemon Platinum. On the negative side, I might have some trouble in the final areas. Still, it’s nothing some grinding won’t cure. Other than having two starters and the Gyms and locations being slightly out of order in the anime, it’s quite possible to follow Ash throughout Pokemon Platinum or Generation IV in general very accurately.

Well, you also need to “transfer” Pikachu, but that’s probably a given.