Surprise!  I didn’t have to use cheats to add Pokemon to my party this time. The DS generation of Pokemon games, including Pokemon Platinum, has a well-developed set of tools for save editing, so I didn’t have a lot of issues with editing my saves.

Probably the most popular tool to edit saves and create Pokemon for all of the Nintendo DS Pokemon games, including Platinum, is actually usable online. You can find it at

It works nicely, can create Pokemon out of thin air, basically, and can do a lot of other things. However, it’s really meant to be used to create level 100 teams for multiplayer matches. This is why I opted for their less powerful, offline tool – PokeSav.

I did use it in combination with the online version, though. I used the online version to create a Chimchar, Pikachu and Aipom at level 100, because I didn’t feel like figuring out how to create a fresh Pokemon at a low level. Instead, I just copied the three level 100 Pokemon to my first PC Box in the save and then reduced their level and stats to the proper values. I actually went on the extreme here and dropped all three of them to level one, just to see how that feels in the game. 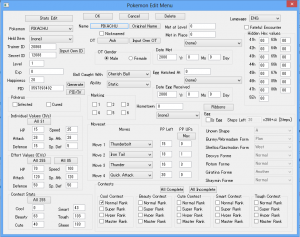 PoSav looks complicated, but all the stuff is mostly in the same place as with the previous tools.

The issue here was figuring out how to get the save out of DeSmuME, which is the probably the most advanced emulator out there right now. The thing is, PokeSav doesn’t detect the emulator’s save format (.dsv). However, selecting “All Files” in the file dialog and selecting the save that way worked fine and PokeSav could read it without issues.

I edited all three of my Pokemon and while I was at it, also gave Aipom and Chimchar, as well as the starter I picked, Turtwing an Everstone each, just so I don’t have to cancel its evolution any more.

How to Import a Save to DeSmuME

Once that was done, I had a new problem. I’m not sure how the emulator works exactly, but it doesn’t read it’s saves from the Battery folder where it stores them. It seems these files are only used as backup for the real save, which is stored somewhere internally. Some googling helped me figure out that I had to use the DeSmuME’s Import function, located in

This function can actually import a .sav file directly, which is a nifty feature, because it means I can transfer a save from a DS Flash cart, or a different emulator, such as No$GBA. I didn’t need that, though. All I needed was to import my edited save, reset the emulator and load my game. 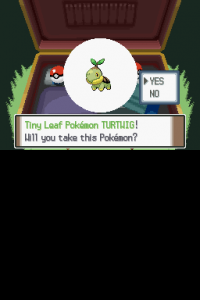 I picked the grass type again, though, I started with Chimchar as well.

By this point, I was already in Sandgem City, since I needed to go there to access a PC.  Why a PC? Because for some reason, adding Pokemon to my party directly didn’t work. PokeSav would see them just fine, but my in game party remained empty no matter what I did. Adding them to a PC Box worked like a charm, though.

In any case, that was it. I had four Pokemon already, on my way to get the fifth one, and I didn’t even get to the first gym. This part of the challenge will definitely be different.