Remember my “Complete every Zelda game” challenge? The one I “started” months ago, but only got through the first game. Well, a person on reddit said they’re considering the same thing, so this made me think about continuing my own. I’ll be skipping Zelda 2 for now and going straight for “A Link to the Past”. Zelda 2 is not really like other Zelda games, so I’m not that eager to play it yet.

Compared to the original, there has been a lot of improvements in playability and user friendliness in the SNES sequel. You now have a proper, usable in game map as well as something akin to an objective tracker. There are also ways of learning where you should go next by spending rupies and hints on where the hidden rooms and items are. Overall, it’s much more polished and really allows you to focus on the game, instead of going around hardware and software limitations.

At the start, Link wakes up in his house in the middle of the night, with his uncle going somewhere. He hears the voice of princess Zelda in his head, asking for help, so he listens. The castle has been attacked and the castle mage is behind it. The game leads you to the castle and teaches you how to find your very first hidden passage, a hole beneath a bush. 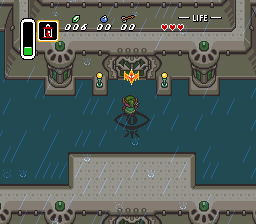 The door to the castle was locked, and it will probably stay locked for a while.

Once Link jumps through, he finds his uncle injured and takes his sword. The area beneath the castle then serves as an intro dungeon. You learn some of the mechanics, find your first map and finally fight something of a mini-boss guarding Zelda’s cell. Link frees her and she follows him to the ground floor where they uncover a hidden passage. After some more dungeoneering, they finally reach the Sanctuary, where she will be safe. At this point, Link earns his first extra heart container. 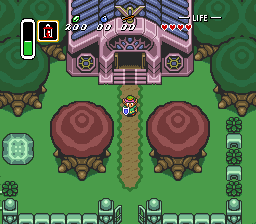 This is the Sanctuary.

She asks Link to find a way to defeat the wizard called Agahnim. Apparently, he’s trying to open something called “The Seven Wise Men Seal”, which he shouldn’t do. To stop him, I’ll need the master sword and the people of the nearby village should know something about that. This is how the game leads you around throughout, so there’s no guessing, no map drawing, you just play.

I got to the village and was told their elder is in a place to the east. Before I went there, I explored everything and found a bunch of items. I got a total of four heart pieces, which gave me my fifth container, some bombs, some arrows, a bottle which allows me to store fairies in it and a net which allows me to catch faeries. Back in the dungeon, I already got the boomerang and back at home, I got the red lamp. All in all, I already have a nice assortment of items.

Once I was done exploring, I went to the east and spoke to the elder. He said he knows how to get the Master Sword, but Link needs to prove himself worthy first, which means he needs to find three magical medallions. The first is the medallion of Courage and it’s located in a dungeon nearby. Now, at this point, I’ve already found the Master Sword at the Lost Woods north of the village, but I couldn’t pull it out of the stone. I guess that’s why I need the medallions. 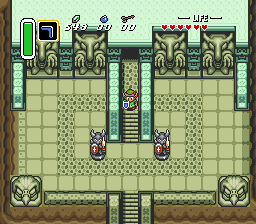 I got to the first dungeon fast enough and started exploring it. It wasn’t to difficult, but it takes time to get used to the game, so I had to restart at the first room several times. Thankfully, the mechanics work in such a way that the important part of your progress isn’t lost when you die, so eventually, I got the map, the compass, the big key and eventually, the Bow, which is the primary reward of the first dungeon. I used the bow to kill the first boss and got another heart container for it, as well as the Medallion of Courage. I returned to the elder and got information on where to find the next two medallions.

He also gave me Pegasus shoes, which allow me to charge enemies and knock things down. I immediately remembered a book on top of a shelf in the village library, so i went straight there to get it. The book allows me to read the ancient language inscribed, among other places, on the stone the Master Sword is stuck in.

I’m guessing I have to go to the next dungeon now, but before that, I’ll be doing some exploring, to see if my new shoes can get me anything else.