Since I didn’t go to the area of the next dungeon yet, I decided to explore around it for a bit. Misery Mire is located where the desert dungeon was located in the light world, but it was a swamp in the dark dimension. The exploration was worth it, netting me another two heat pieces as well as a bunch of rupies.

I couldn’t enter the dungeon yet, though. I was definitely at the entrance, but I couldn’t see any doors. What I did see was a small glyph on the floor nearby, which had the same yellow and brown coloring like the two spells I collected previously. This one, however, I didn’t have.

I started looking for it and it took me a good hour, but I finally found it west of the Tower of Hera. The spell is called Ether and it’s obviously lightning based, if the icon is any indicator. I got back to the Misery Mire entrance and used it on the platform to open the entrance. 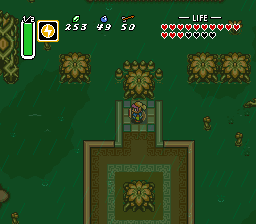 Misery Mire required plenty of keys to get ahead, but the dungeon was designed so the key you needed was almost always nearby, usually attached to one of the enemies. Basically, the dungeon was way more focused on fighting than on puzzles.This dungeon was a lot harder and longer compared to the Icy Palace. The most annoying part was the large number of those laser shooting pillars from one of the earlier dungeons. I’m pretty sure these do a heck of a lot more damage than the ones I’ve seen before, though.

The second floor was in complete darkness, meaning I had to navigate slowly, and carefully. Of course, I didn’t really do that, so I had to restart in the first room plenty of times before I finally got through it. Eventually, I got to a room with a button that needed something placed on it, but no blocks nearby, nor any blocks or holes on the floor above. 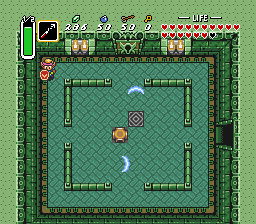 There’s a lot of projectile dodging in Misery Mire

I moved on and finally got the item of Misery Mire – The Cane of Somaria. This was what I needed for that button. The cane creates a movable block on the ground. Another use of the cane while the block is placed destroys it and causes missiles to shoot in the four basic directions, so it’s basically a bomb on a manual trigger. I placed the block on the button and was finally able to get to the boss. 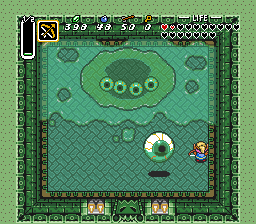 I present to you, the Googly Eyes Boss

I got another crystal and another heart container. It was time for the next dungeon.The boss was, again, relatively straightforward. First I had to use the sword to destroy a bunch of floating eyes, while avoiding hits from the body. Once the small eyes were gone, the large one started following me around the room. I used my sword and the protection staff the name of which I keep forgetting, until my magic was gone. After that, another few hits with the bow and arrow were enough to beat it.