Since I pretty much stumbled into the Ice Palace entrance by accident, I decided to just go for it. Right at the start, I had plenty of trouble. The enemy in the first inhabited room wasn’t getting hurt by my sword. It took me a while, because I somehow apparently went blind, but eventually, I figured out that the Fire Rod kills it in one hit. After it was dead, I realized there’s a sign on the wall that flat out said the enemies are hurt by fire. 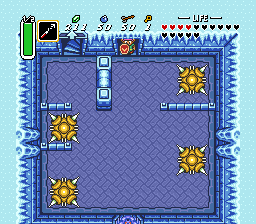 These spikes can hurt a lot.

Another new enemy appeared a few rooms later, after I got the compass. I’m not sure what they’re called, since I don’t have the game manual, but they’re giant skeletons which crumble with a single sword hit, but get back up seconds later. This time, I immediately noticed a sign on the wall, which said I need to use a different weapon once they’re down. It wasn’t too hard to figure out the bomb was what I needed.

The Ice Palace, of course, had plenty of ice tiles I had to walk on, which means plenty of rooms with spikes and those spinning fire things to crash into due to the slippery ice floor. Suffice to say, it was hard and annoying, but eventually, I managed to get through most of it.

The puzzles consisted of finding holes in upper floors to jump through, so I could access more areas on the lower floors. One of them even involved pushing a block through the hole, so it lands on a button on the lower floor.

The contents of the boss chest were my favorite part of the dungeon. The chest contained the Blue Mail. It’s a stronger armor which increased my defense and severely reduced damage I was getting from enemies. As I said, A Link to the Past really knows how to make you feel more powerful while not lowering the difficulty of the game at later areas. 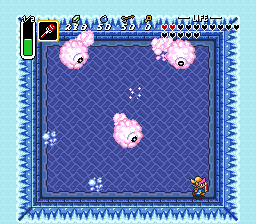 This boss was more of a skill challenge then a puzzle.

The boss was relatively easy, though I needed enough magic to defeat its first form. I used the Fire Rod to destroy his outer frozen shell and then the same item against his second form. Once I was finally out of magic, I continued to hit him with the sword, while avoiding the stuff coming at me. The fight was simple and straightforward, but still not too easy. I picked up another heart container and another crystal, so I was ready for my next dungeon.