Before I went to get the final crystal, I decided to do my last bit of exploring. First of all, I went to the bomb shop in the dark world, which is located on the same spot where Link’s house was in the light world. The shop sold red bombs for one hundred rupies a piece. The bomb was not an item. It actually just followed me around like the chest I’ve already found did.

I bought it because I thought it would be an upgrade for my bombs, so I didn’t really know what to do with it at first. Then I remembered that cracked wall at the pyramid. I made the bomb followed me there and then ditched it at the crack. It exploded and opened a passage to another magical pond that accepts items. 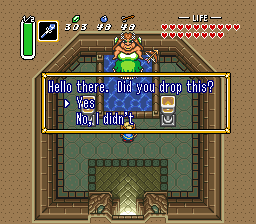 I threw my bow and arrow and got the silver arrow upgrade. Then I tried my bottle and got a green potion. After that, I tried pretty much every item I could and it worked on just one. Boy did it work, though. The pond actually upgraded my sword!

After that, I used the light world transportation to get to the mountains and went to explore the area past the ruined bridge, which I could now access with the hook shot. I managed to find a lot of loot, but most of it was just bombs, arrows and rupies. Still, there was a heart piece, so it wasn’t all for nothing. Eventually, I got to the entrance of the last crystal dungeon, the Turtle Rock. In order to enter it, I had to solve a puzzle in the light world and then use Quake on the platform, to open the door.

Turtle Rock made me use the Cane of Somaria extensively. The Cane could be used to create platforms on certain spots of the level, which would then let me travel along the existing route. It also contained plenty of spiked floors and button puzzles. 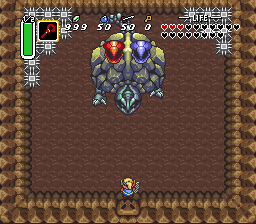 The middle head was the most dangerous one.

The boss made good use of my green potion. It was a turtle with three heads. The red head was hurt by the Ice Rod, while the blue head was hurt by the Fire Rod. First, I used the fire Rod to kill that one, then a combination of the Ice Rod and the sword to kill the red head. Once the two were dead, it turned into a snake which I had to finish off with my sword. Luckily, I saved up some magic, so I used the protective staff in the last phase to make it easier.

In any case, I got my last heart container and my last crystal. It was time to go and defeat the wizard.