As I said, getting the Titan Gauntlet in the last dungeon meant I had some exploration to do. First of all, I went down to where the race mini-game was in the light world. In the dark world, it’s replaced with the digging mini-game where you play 80 rupies for 30 seconds of digging. Since my experience tells me these sort of mini-games contain special bonuses like heart pieces, or even heart containers, I decided to try my luck for a while, but I didn’t get lucky enough. After a couple of hundred rupies spent, I decided to give up for the time being.

Instead, I went to talk to the frog one screen before the mini-game. The route to it was blocked by an extra heavy boulder, so I couldn’t do it before. The frog asked me to take it to its partner, somewhere in the village. I went through every house, but nothing. Then I went one screen east, where I remember a dwarf was missing a friend in the light world. The dark version of the house was destroyed, but I got an idea. 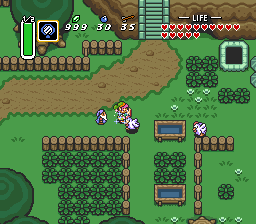 The frog was a dwarf. Is that racism?

I used the mirror and it worked, which makes me wonder why I couldn’t use it with the kid in the forest, instead of him turning into a tree. I guess you shouldn’t think to hard about Zelda games. In any case, the dwarves were reunited and they offered to temper my sword for 10 rupies. I had to move a couple of screens before the sword was ready, but it was well worth it. The Master Sword is even stronger now. 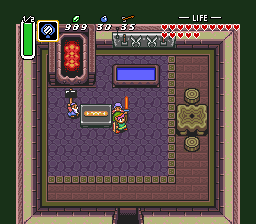 In the dark world, their house was ruined, but a chest was in it. I couldn’t unlock it, though. Instead, the chest started following me. Now, I’ll be honest here, I had no idea what to do with it, so I succumbed to the Internet. The chest was supposed to go to the light world, to the man at the entrance to the desert area. He unlocked it for me and it contained an extra bottle. Great, now I have four empty bottles because I keep forgetting to fill them up.

Since I was relatively close to the lake, I decided to go spend my 999 rupies to upgrade my bomb and arrow containers. You see, I forgot to mention this, but at the central island in the lake, there was a pool where you can throw rupies in for luck. For every 100 you get rid of, a fairy pops up and offers to increase your maximum bomb or arrow storage by five. Since I can’t go above 999 anyway, it’s a god place to spend extra money at. I upgraded both of my containers to fifty and then lifted the one heavy rock on the island.

It uncovered a portal to the dark world, which led to the area right in front of the next dungeon. A happy coincidence?