After clearing the first dungeon, it took me a while to reach the second, even with all of the hints.

Well, as a matter of fact, the hints, at least the hints I’ve been getting from fortune tellers, weren’t really helpful. They keep telling about a Zora I’ll be meeting at the source of the river. This made me think the next dungeon is on the northern location, out of the two marked on my map, when it fact, it was the southern, in the middle of a desert. Eventually, I got there, but not before finding a bunch of heart pieces, putting me one short of a full extra heart. 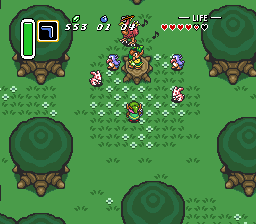 Exploration revealed a spot in the woods, probably important for later.

The new dungeon, naturally, had a desert theme. Many of the enemies would hide in the sand emerging later, usually at an inconvenient moment. After a while, though, I got used to the patterns and started clearing rooms. The map was easy to find, with the compass second, quite far away from the map.

After a while, I’ve reached what I thought was a dead end, but then I realized I had to use one of the side exits from the dungeon to reach the second area. The big key allowed me to also get a new item, the Power Glove. This one allows me to lift the greenish rocks scattered around the world, but wasn’t really helpful with beating the boss. 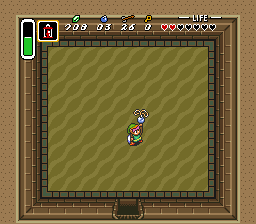 The second medallion is mine!

The boss was familiar to me, even though I haven’t played the game. Pin, a boss from the Binding of Isaac, was heavily inspired by this one. The behavior is slightly different though. It moves much more slowly, since I have to hit him with a sword, instead of from range. Once he was beaten, I got the second medallion, the Medallion of Strength, as well as another heart container, bringing me up to a total of seven (and three quarters).

My session time was nearing an end, but before I saved, I took a quick search around the area, just to see what I can access with my new ability to lift rocks. I found a couple of hidden rooms, mostly containing minor treasures. All the way to the east, thanks to a tip I got from a bandit in a secret cave, I’ve found the Ice Rod, which allows me to freeze enemies, I’m guessing for longer than the boomerang, but at the cost of magic power.

After that, I returned to town and saved my game.