As I said, I’ve got the sword, but Zelda was captured by the wizard.

I got back to the Sanctuary, where the priest was already dying. He told me the wizard took Zelda to the castle, so that’s where I went. The sword helped me break the seal I’ve seen at the beginning of the game and I entered the dungeon.

This one was pretty much straightforward and simple. I’m not going to say it’s easy, though, because it took a while to get to the end, but only because of the length. I got to the wizard just as he was apparently teleported himself and Zelda away. 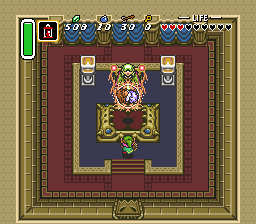 “Bwahahahaa! I waited so I could tell you you’re too late!”

The reality was, while Zelda was transported away, he actually hid in a room behind the curtain, so that’s where I’ve found and fought him. Thanks to a tip provided by the elder through a communication tablet in the castle, I knew I can’t hit the wizard directly. Instead, I had to hit the missiles he was launching at me to deflect them back at him. This was extremely simple, once I figured out the pattern. Basically, I needed to stand still and swing my sword on every shot, unless he teleported to the top center of the area. In that case, I needed to go up and to the side of him, to avoid the lighting.

I’ve beaten him, but he transported both of us to the dark world and that’s when I realized the game was only beginning. The elder contacted me immediately and told me I need to defeat him in the dark world to rescue Zelda and restore everything. In order to beat him, I need to find the seven maidens who can help me, each in one of the dangerous dungeons in this dark world. 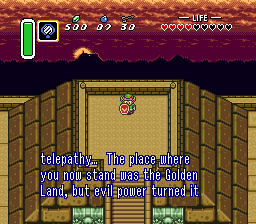 Time to actually start the game, I guess.

Basically, I only got through three tenths of the game, if even that far. Oh well, time to get to the first dungeon. What I’m hoping at this point is that I will be able to go back to the light world before the game is over, so I can pick up everything I missed. I rushed to get to the castle, so I’m bound to have missed something.