Today, I’ve mostly spent a lot of time exploring both the light and the dark world. I realized I can use the mirror to switch to the light world at will, so I’ve been using it to go back and forth. For a short time, a portal back to the dark world remains on the spot where I use the mirror and if that goes away, I can always use one of the fixed portals scattered around the light world.

I’ve been picking up some heart containers as well as heart pieces, but mostly, I’ve been looking for areas I can access through world transfer. For instance, there’s an island at the lake with a heart piece on it, but I could only get to it by standing on that spot in the dark world and then using the mirror. 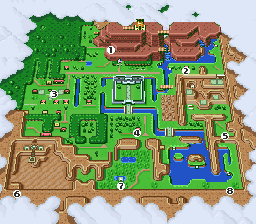 Quicktravel existed even in the classics.

I got there and found is grandfather at the inn. He told me to go and play it at the village square. This caused the bird statue there to come alive. Now, every time I play the flute, the bird can transport me to one of several areas of the light world.Eventually, I got to the forest where a kid was playing a flute in the light world. In the dark world, the same kid was there, but transformed into an animal. He said he missed his flute very much and asked me to retrieve it from the light world, using the shovel he gave me. I got there and eventually found it, after lots of digging. Sadly, he couldn’t play it anymore due to the transformation, so he decided to let me keep it and asked if I could maybe return it to his family at the village.

After this, I did some more exploring in both dimensions and managed to get two more items. One was a magical cloak that drains my magic power, but keeps me invisible for the duration. The other was a magical staff which creates a protective shield around me. For this one, I had to use the magical cloak to get it.

Both of these drained magic power like crazy, but luckily, I’ve found a cauldron just east of the village in the light world. Using the magical powder on it caused a creature to appear, which cast a spell on me, halving my magic power expenditure, regardless of items. 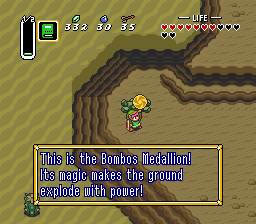 The dungeon wasn’t too bad. I’d even say it was easier than the previous one. The best part about it, though, was the loot. I finally got the hook shot. This awesome item can pull me towards pots, skulls, chests and other similar items, allowing me to get across gaps or just move very fast.Eventually, I decided it was time to go clear the next dungeon – the Swamp Castle. I had to find the entrance first, though. It was at the same place where I could drain part of the swamp in the light world. After some messing around, I realized that draining the lake also transfers to the dark world, so that’s how I discovered the entrance. 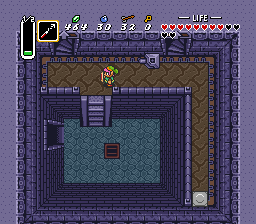 A new type of switch was introduced here.

The boss was easy enough. The first phase required me to use the hook shot, while the second phase was just the standard “avoid and hit until it’s dead”. I got my heart container and the third crystal. The next dungeon is supposed to be at the Lost Woods, or Skull Woods, as they are called in the dark world.