Formello looked more like a real fortified city, with a moat and proper walls. I started exploring it and soon got some tasks I could do. I also got one I might not be able to complete. The innkeeper Gad wants to get his hands on some sugar, which is extremely rare in Avernum. I already found a bag of it in Fort Avernum, but I didn’t realize I’ll need it, so I sold it already. I hope there’s another bag somewhere in the game, but if not, this will be a quest that I won’t complete. In the same inn, a sage named Golizar asked me to find the Orb of Thralni, which is an artefact I remember from Exile 3: Ruined World. Back in that game, it allowed the user to fly for a few turns anywhere, including the world map. Apparently, a dragon should know where the Orb is.

There was a job board in Formello to, so I managed to get a whole bunch of minor tasks, including a message delivery to the dragon Golizar told me about. Jen, the food manager has issues with her mushroom meal supply, so she asked me to get some from the Great Cave. I’ve spent a large chunk of my money to buy an iron broadsword for my berserker, and then the rest of it on powerful priest spells at the temple of the Holy Chance. I would have spent even more on mage spells taught by Miles, the local mage, but alas, I didn’t have any more. It was time to go earn some. Before that, though, I went to speak to the mayor, since apparently, her necklace, which is used for communication with the Castle, was stolen by nephilim.

The tasks turned out a lot tougher than what I previously encountered. Monsters started to pack much bigger punches and my berserker especially started dying often. I decided to try and backtrack for a bit, to gather some gear and gain a level or two. I have managed to deal with an ogre and dispose of some bats, but that’s about it.

Exploring the eastern galleries to the south, I eventually entered Fort Dranlon. This is basically the first line of defense from the Slithzerikai and it was in poor condition. Most of the outer walls are destroyed and magical barriers are put in their place, maintained by the fort wizard, Mairwen. She offered to teach me how to dispel these barriers, but only if I steal a tome from the nearby slith village. 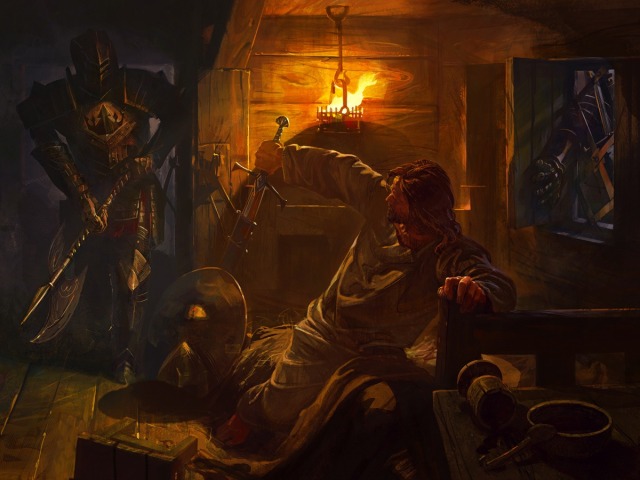 This one looks like a Bible illustration to me.

I also met a mysterious man who told me something about an organization called the Scimitar. They are situated in Baghra, which is in the Abyss. I offered Commander Rosie to uncover what the slith are planning. She said I would need a bout to get to their base, which they don’t have anymore, but I might be able to find one in Cotra. Of course, I have no need for that information, since I already bought a boat in Formello.

I continued to explore the eastern gallery, this time with the boat. To the south of the central lake, I managed to find what I believe is a dragon’s lair. I tried to explore it, but I was soon chased out by drakes, which are still too tough for me. I also managed to enter the honeycomb, but that place also seems too tough. There’s one thing I forgot to mention in one of my previous entries. North of Cotra, I’ve found a hidden cave filled with strange crystals. Six of them were broken, with chunks missing, so I’ve been finding some of those while exploring. At the moment of writing this, I had 2 of them, but I assumed I’ll probably be finding more soon enough. In a series of caverns to the east of the great lake, I discovered a couple of slith settlements, as well as a cave belonging to an old drake. In exchange for some of my food, he gave me another one of the crystals, pushing my total up to 3. I didn’t hang around the slith settlements too much, since slith seem to be another type of foe that’s still too tough for me.

The further I explored the surrounding areas, the more obvious it was I won’t be doing any sort of training there. Just about everything I encountered was extremely tough for my party. It seems I had no other choice but to go to Formello and start doing my job there. Before I did that, though, I did manage to find another crystal in a hidden area north of Dranlon. This brought my total up to 4. I tried to bring the boat up north with me, but I couldn’t find a passage, which should have been obvious from the map, so I went there on foot.

The first place I started clearing out was the underground Nephilim fort in the north of the Eastern Gallery. At first, it seemed like there was no way for me to breach the gates, but soon I discovered a concealed switch which opened a hidden passage inside. The whole place was actually full of hidden passages, which I could use to flank and surprise otherwise tough foes and pick them off few at a time. In one of the passages, I discovered a soldier who got sent there to rescue some prisoners. I helped him with that and killed the nephil leader along the way. It was a tough battle, with my berserker dying, but In the end, I managed. I’ve cleared the entire fortress, other than a single locked door. I also found a dark altar with a nice dagger on it, but trying to take it summons dangerous demons, so I’ll have to return to that later.

After clearing the fort, I decided to postpone going to Formello, and went to Cotra instead, hoping there’s a reward for saving the prisoners. Is per usual, before entering the city, I explored the outer walls. At the southeast corner, I’ve found a secret room with murdered bodies. Of course, this needed to be reported to someone in charge of such things. At the docks, a woman named Nance taught me something I didn’t know. When the first people arrived to Avernum, they soon began finding strange blue crystals in various places. They called them Wisdom crystals, because they would speak to the user, teaching them things, but also possibly driving them mad. No one knows who made them or what they are exactly, but I’ve already found one near Formello and used it on my berserker. I’m not sure if there are any bad effects because of it, but I haven’t noticed any yet.

The local alchemist offered me a reward if I manage to uncover the location of Erika’s tower. Erika is one of the legendary Avernum mages. On a side note, I’ve also spoken to Elspeth, Nance’s “companion”. I guess their relationship is why the Empire exiled them to Avernum. I do not recall this being in the original Exile game, but I like the idea. It adds a dose of realism, so props to Spiderweb for adding this detail. Moving on, I’ve spoken to the mayor about the dead bodies and got my reward for freeing the prisoners. I’ve gathered some info around town, learning about a crypt in the tunnels north of the Eastern Gallery, accepted all the jobs on the job board and immediately started clearing some minor ones.

Eventually, I decided to go get the necklace stolen from Formello. I’ve found the Nephilim fort easily enough and fought my way to the back entrance. This got me direct access to one of their temples where I killed their priest. In a desk in the back room, I’ve found a letter addressed to someone named Thinshadow. Apparently, he claimed the necklace for himself and is now hiding behind a locked door which requires the key from the goblin lair. Since I already have it, I could skip a step. 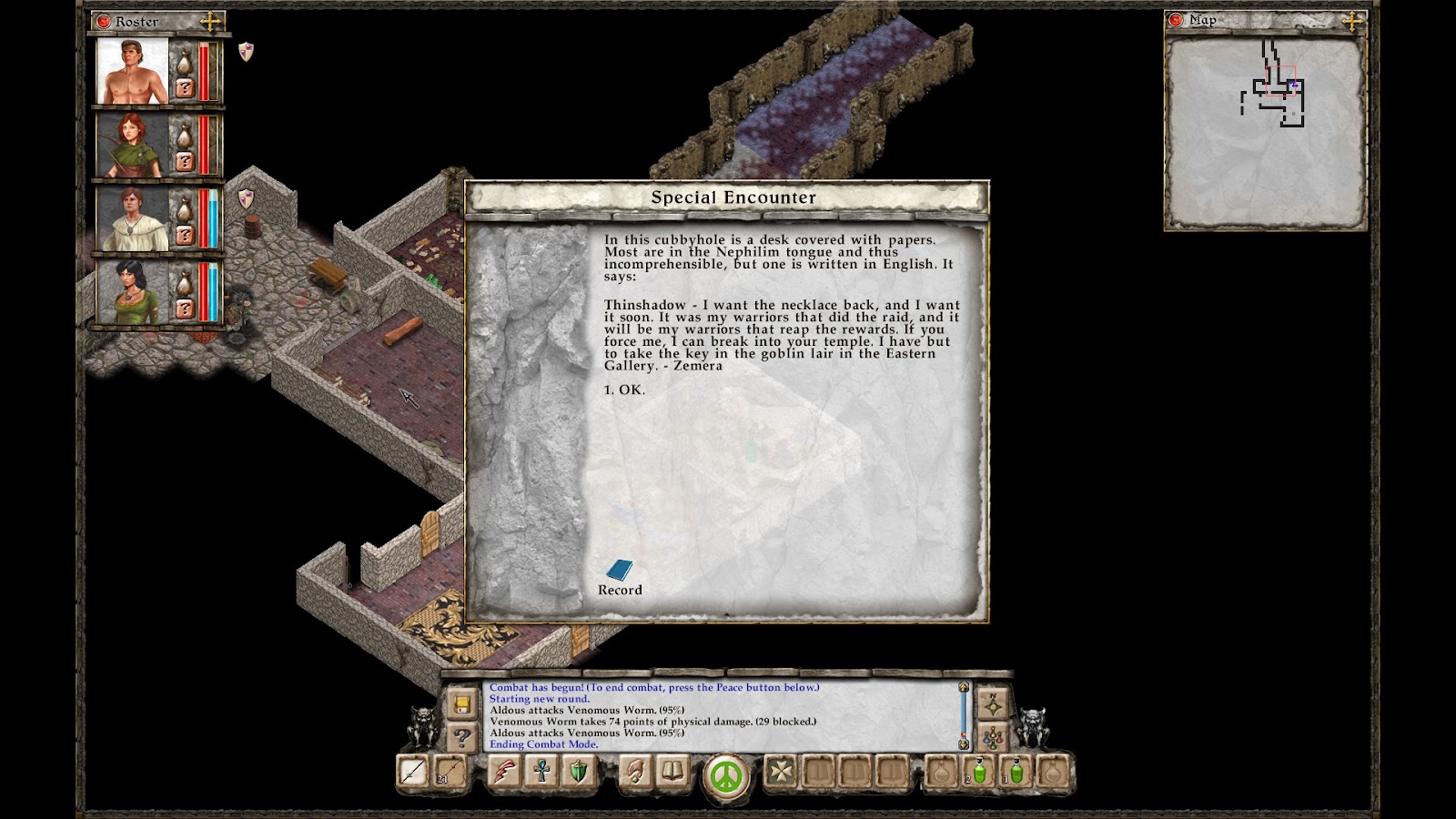 There you go, my first in-game screenshot of Avernum.

The fort consisted of several levels, with me starting on the ground floor. The floor was cleared easily enough, with only an ogre mage being an issue. I got a bunch of loot, killed a bunch of cat people and goblins, and was ready to go to another level. I decided to go for the basement first.
Like? Share!