The Tower of Magi is enveloped in fear. The higher-up mages are hiding something and it shows on the various students there. I talked to X, one of the Triad, but he wouldn’t say anything. However, he promised me to teach me some spells if I get some notes from the Library in Baghra. The Triad consists of X, Solberg and Linda. They are considered the most powerful mages in Avernum, and they run the tower. The Tower itself was built by Erika, the actual, most powerful mage of Avernum, but it’s unknown where she is at the moment. Solberg is also on some expedition, so Linda is basically the one in charge for the time being. In one of the chambers, I’ve found an experimental portal which connects to the various pylons I’ve found in the cities across Avernum. The mage in charge taught me how to use it, so I can now quickly travel to most areas I’ve already been to. 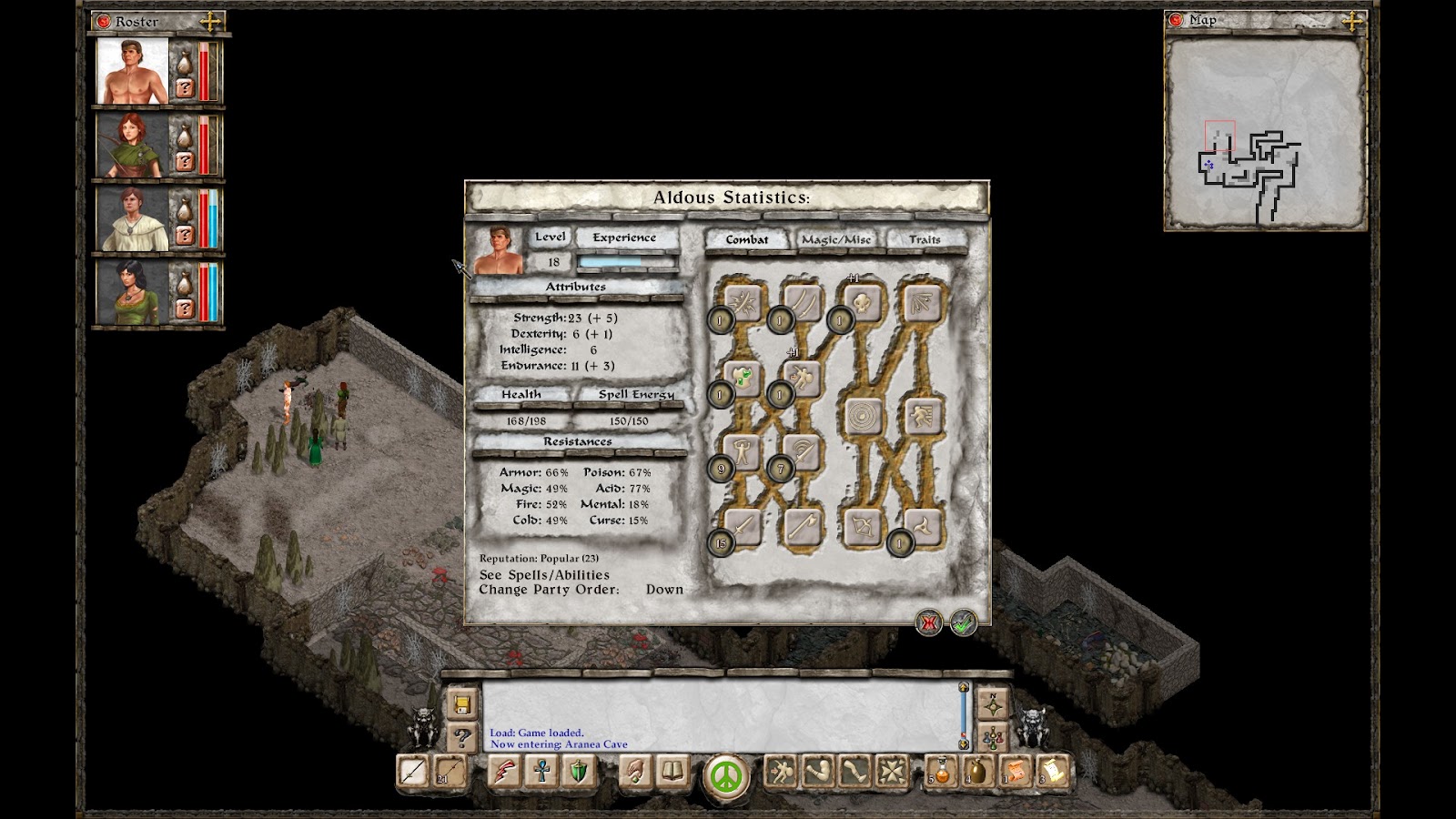 I used the default names for my character’s, I think. Aldous is my tanky melee fighter.

After exploring the tower, I decided it was time to help the town of Mertis with their undead problem. The nearby passages soon revealed a cave which seemed to be the source of the undead. After a series of spiralling hallways, I’ve reached the central chamber, where a number of human and slith bodies were frozen, perfectly preserved. Through a vision, I discovered what happened. The Slitzerikai chased a group of Empire soldiers to this place, and both sides got trapped by a cave in, forced to die of starvation. Their mutual hatred created the curse. I killed the ghost commander, but the curse was not gone, only delayed. At least for now, Mertis will be safe.

After emerging from the cursed place, I realized I never actually visited Mertis. I simply followed the rumours and acted. It was a small farming community, with very little to offer. I’ve found the mayor, told him of what I did and moved on.

Since I was much stronger now, it was time to start dealing with the Slitzerikai problem. The first target was the newly built tower on the island close to Cotra. It was relatively easy to clear, and I’ve found some plans there I couldn’t read, as well as one of the missing crystals from that cavern nearby. The crystal was behind a hidden switch in the central lake.

I went to do some deliveries in the area of Formello and discovered a couple of new quests on the job board. I also managed to get past the barrier underneath Formello and discovered an Imperial mage there. Apparently, she was there with permission of the king and has a task for me. Her golem defenders seemed tough, so I decided to cooperate, for now. There’s an assassin hiding in the bat caves to the south, probably past that switch I didn’t know how to handle. The mage wants me to kill him. I also found a hidden passage in Formello, leading to a couple of treasure chests with strong magical defences. I don’t know who put them there, but for now, I can’t do anything about them. 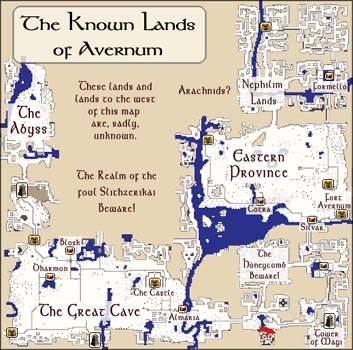 I apologize for the bad quality, but I like maps. This one is of the known regions of Avernum.

I’ve done what the mage asked of me and was offered a second job. I am to find a man named Kyass and help him. I don’t think I’ll be completing this one. The name Kyass already reached my ears several times before. The last I heard of him, he is calling himself king of Avernum and is operating from a settlement in the north. Aiding him would mean betraying the real king, so I’m guessing I’ll have to do something else.

I’ve continued dealing with the slith and decided to invade the temple where a piece of the Demonslayer was held. It was a tough place to clear, but eventually, I recovered the sword piece and managed to fight my way out of the temple. Next up was getting the Slithzerikai Arcana for that mage in Fort Dranlon. This was much easier compared to the sword piece. As a sign of gratitude, she taught me how to dispel magical barriers. I guess I won’t need any more piercing crystals from now on.

I decided to take a side trip and deliver some blacksmithing supplies to Silvar. This made another job available, which required different supplies. I paid a visit to some of the dungeons I’ve already cleared, including the early Nephilim cave. I noticed I missed a few things there on my first run, including a room guarded by two crypt demons. It was somewhat of a tough fight, but I managed to defeat them and realized they were guarding the pommel of the Demonslayer. Now I just need to find someone who can reassemble the sword.

I went to Fort Draco to do just that, since I remembered they have a huge smithy there. I was wrong, though. I still need a few more pieces of the blade. I moved on to explore the rivers to the north and found a secluded monastery. The clerics there taught me how to cast the Return Life spell. Slightly to the south was Lost Bahssikava. It is the place the Slithzerikai were banished through from the lower caverns. There was still a peaceful tribe living there, hoping to uncover what they call the “Speaking Stone”. It’s their sacred artefact, but the expedition that went to retrieve it hasn’t been heard of. This place is still slightly above my level so, while I agreed to help, I won’t be doing it any time soon.