South of the slith colony, I’ve found an Aranea lair. This seemed to be their primary lair, because there queen was on the second floor of it. I tried to fight her and failed, so I might return to that later. For now, she is definitely too powerful. The rest of the lair, however, was cleared completely and easily.

My next objective is to gain entry to the Slitzerikai fortress. In order to do that, I needed a key, which can be found in one of the minor bases. I’ve tried one located upriver of a large waterfall. The slith dabbled in demonology there, so I had to fight plenty of demons to clear it out. Eventually, I’ve found the chamber of the shaman leader and killed him. In one of his chests, I’ve found an onyx key. I’m not sure if this is what I need, but it’s something. 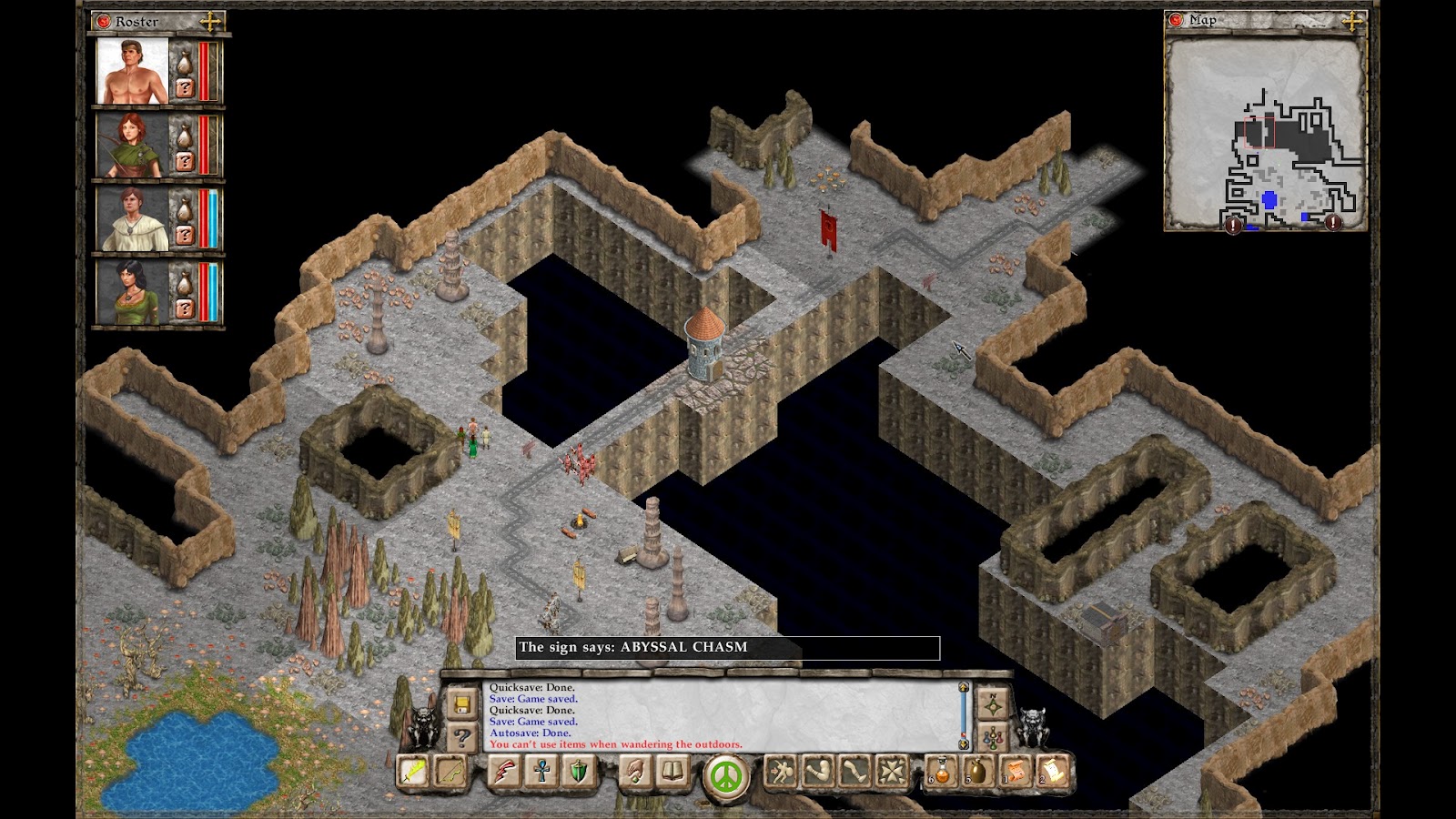 To the west of the minor base was the network of waterfalls where the Orb of Thralni was supposedly lost. I decided to try my luck and search for it. It didn’t work out. The wrong turn would take me to the Great Cave, while the right turns took me towards groups of enemies I couldn’t defeat yet. This is another one I will have to do later. There was also a drake cave nearby, but I decided to go to a town and recuperate.

After some rest, I returned to the great cave to tackle the gremlin menace to the south. On the way there, I stopped by Patrick’s Tower to heal Patrick’s wife with the graymold salve I procured. As a token of gratitude, he taught me how to access the ruined keep of the demon lord who once ruled Avernum, but I won’t be going there yet. As for gremlins, Lord Chuckles was a pain and exploring their castle was even more of a pain, but eventually I cleared it and got access to their treasure. This gave me a nice sword with a poisoned blade. I’ve gone out to complete some other minor task and then returned to the Castle. I’ve killed the demon trapped in the cells there, as the guard captain asked, so he gave me a mission. I have to go to Kyass and find out what their intentions are.

Of course, I already decided to focus on the slith for now. I went north of fort Emerald to clear out one of their bases there. It was an easy task. In one of the rooms in the base, I’ve found another set of plans which someone will definitely want. To the west of the base, there was what looked like a regular gremlin cave. After some exploring, I’ve realized it was a secret Imperial outpost. I’ve killed the empire soldiers there and gathered their equipment. Whatever it was they were planning, it failed. In the opposite direction, to the east, there was a tomb of some person named Drath, which I tried to explore, but I couldn’t get past a locked gate. According to an abandoned journal I found there, a band of adventurers hid in the tomb, found the key and took it with them to the dragon Morthrax. For now, the area was as clear as it could be, so It was time to move on.

Taking the absolutely longest route to the slith fortress, I decided to take care of the bandit problem north of Saffron. In the eastern lair, I’ve found letters from someone named Meena. This person was obviously giving orders to the bandits, but was also very clear they should avoid killing anyone if at all possible. Also, the leader of the lair claimed he was Empire, though that might just be misplaced loyalties. The western base was in ruins when I got there. A bunch of eyebeasts have completely destroyed the place. After clearing all of the ground floor, I’ve found a way to the floor below, where a group of brigands was still hiding. Their leader was my old friend, Lagrand. It seems his experience in Avernum was just as eventful as mine. I offered him a chance to leave, but he wouldn’t hear of it, so I had to kill him. It was a tough fight, but it was finally over. 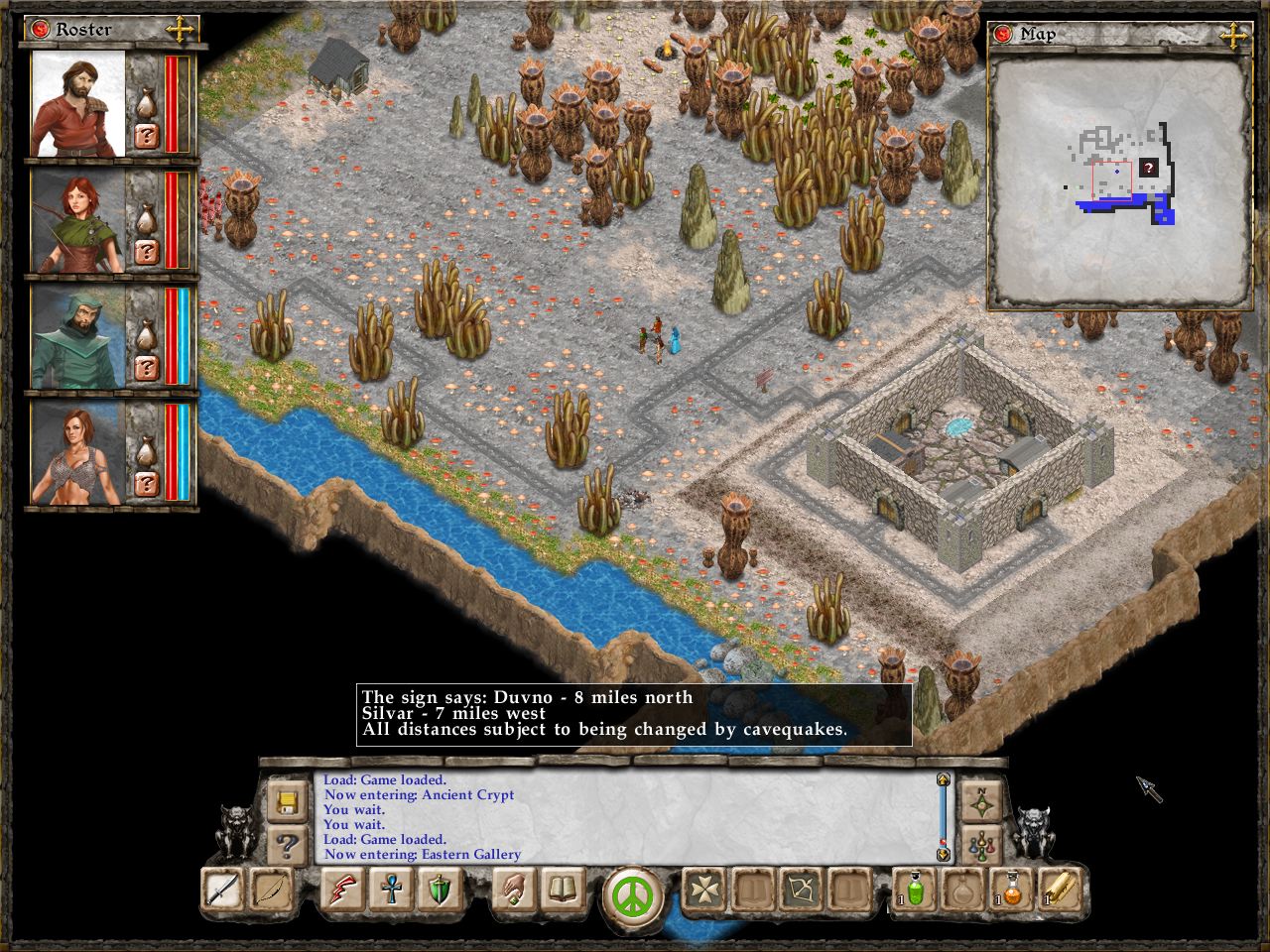 Fort Duvno is one of the earlier forts.

With the bandit issue taken care of, I tried my lock with the Orb of Thralni again. This time, I managed to kill the pack of vengeful shades easily. After a couple of attempts down the maze of rapids, I’ve finally found a way to a basilisk infested cavern. In one of the final rooms, I’ve found the orb and the monster responsible for killing the First Expedition. It was a lich. The battle was easy and the spoils were decent.

Finally, I decided to go to the slith fort. I took a brief trip to Fort Emerald to recuperate and then landed my both on the island where the fort was located.