As I already said in my previous posting, I had to get to Sandgem town in Pokemon Platinum, to be able to properly form my starting party with PokeSav. I started out with Pikachu, Aipom, picked Turtwig as my starter and also added Chimchar. 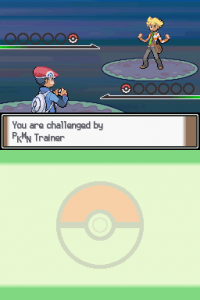 My rival is extremely annoying in this one, but at least he’s not a complete brat.

I then made my way towards Jubilife City, where I talked to Dawn and met Looker, the “bonus” character of Pokemon Platinum, who introduced me to the game’s bad guys, Team Galactic. Soon after, I was introduced to the concept of Poketch Apps, made by the Poketch Company. I talked to the three clowns to get my first few apps, the most important one being an app that shows all my party Pokemon and their health on the lower screen. Well, technically, it shows them on my right screen, since I’m playing on a wide screen monitor, so the screens are placed side by side.

Next up, I had to go east, via route 203 and through a cave, to finally get to Oreburgh City, the location of the first gym. I got there soon enough, but then I realized I made my first mistake. I forgot to catch a Starly. I went back through the cave to catch one on route 203 and then went back to Oreburgh and to route 207 to train.

Ash and the Oreburgh Gym

The thing is, I decided to try and stick to the Pokemon Ash used in gym battles, so I had to train up my Pikachu, Aipom and Turtwig. Sure, a well-trained Turtwig could definitely sweep the rock gym, but Ash preferred using Pikachu for the bigger part of the match, so I had to get him to a higher level to. It took me quite a while to train, since I can’t fast forward as quickly on an NDS Emulator compared to the older generations, but eventually, I got most of my team to level 15 and evolved Starly, as I was supposed to before I even got to Oreburgh City. 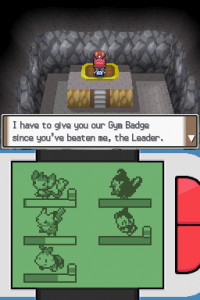 Roark was easy to beat, even if I did use Pikachu in a rock gym. Aipom barely made it, but he made it.

The gym battle was easy, as expected. I cleared the trainers with Turtwig and then switched to Pikachu at the start of the boss battle. He defeated the first Pokemon, then I switched to Aipom as Roark was sending his second Pokemon, Onyx, into battle. Aipom didn’t do much, so I switched him with Turtwig mid-battle via Baton Pass. Turtwig handled Onyx and then Pikachu dealt with Roark’s last Pokemon, Cranidos with a single hit from Iron Tail.

I got the first badge, so now I needed to go all the way to Eterna City. I went back to Jubilife City, where I got my next Poketch App and then went north, fighting team rocket with Dawn along the way and soon arriving at Floaroma Town. This is where I had to deal with Team Galactic, at the nearby Valley Windworks, which didn’t take long. The only trouble I had was with a high level Purugly, which managed to faint one of my team members. 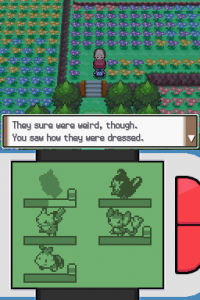 Floaroma Town was nice and relaxing, even with Team Galactic in the way.

With the Valley Windworks cleared, I went further north, but took a short stop near a house where I could rest and heal, to catch a Buizel in a nearby grass patch. In the anime, Ash trades his Aipom for Dawn’s Buizel after the gym at Eterna City, so I thought I might as well get one now. I won’t be using it until Aipom is safely stored in my PC, of course, but this saved me some time and gave me a chance to train some more. I finally went through Eterna Forest and got to Eterna City. When I got there, I saved my game and that was it.

During all of this, only Starly evolved and that was before Oreburgh City. For now, I’ve been following the anime as well as I could, so there aren’t many differences, other than my Pokemon’s move sets, which really can’t be followed at all, without cheating. Whenever I’m able to learn a new move or obtain a TM, I make sure to check which moves that Pokemon uses in the anime and act accordingly, but other than that, there isn’t much I can do. My next evolution won’t happen until after the fifth gym, but at least now my team is full, so I’ll have plenty to do until then.