After some exploring of the dark world and getting used to the new enemies and the damage they deal, I finally decided to go to the Dark Castle, the next dungeon I’m supposed to go to. Before that, I’ve found a circle of stones in water, at about the same spot where the Zoras are in the light world. I threw a skull in it and a creature gave me a new weapon; Quake Medallion, I believe it was called. This spends close to a quarter of my magic power, but it does some serious damage to all the enemies on the screen. 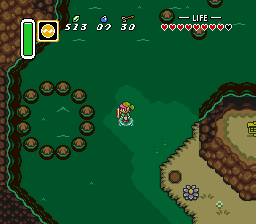 It looked like a target, so I threw a skull in it.

On the way to the dungeon, while going through a maze, a talking monkey started following me. He asked for 10 rupies in order to follow, which I accepted, thinking it isn’t much and it might be worth it. He followed me all the way to the dungeon entrance, which was closed. Then he offered to open it for another 100 rupies. Of course, I accepted this as well. 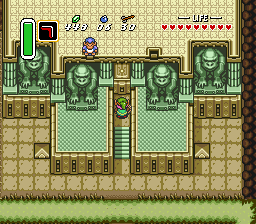 As usual, I forgot the monkey’s name.

The dungeon was full of hard enemies and some pretty tricky puzzles that gave me some trouble, but I managed to get through it. I was stuck at one part for an especially long time, though. You see, you get a new item in this dungeon, a magical hammer. It allows you to defeat one of the dungeon’s enemies and it allows you to hammer various things into the ground in order to open up passages.

Well, one of the rooms contained a button which wouldn’t stay pressed no matter how many times I walked over it. Once I finally got the hammer and explored all of the other rooms, I was sure the hammer would “fix” the button. It didn’t work, though. I went back and forth, trying various ways of using the hammer, trying other items, basically all I could think of, but I kept focusing on the hammer. It never even occurred to me to try and push one of the statues in the room on top of the button. Sure enough, the closest statue was movable and I was able to continue. 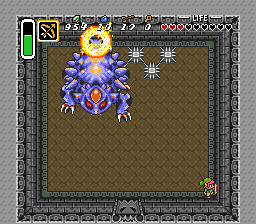 Took me a while, but I managed to beat the boss.

Eventually, I got to the boss and lost to it several times. Again, the game confused me a bit. The very first hit with the hammer destroys part of his mask. The next several hits do nothing to it, even though they do damage, so I thought I was doing something wrong. Still, the boss did make a “I’m damaged” noise, so eventually I decided to just stick to it and keep hitting him. After about 10 or so hits, his mask was destroyed and then I finished him off with the bow.

I got another heart container, as well as the first crystal, containing the first maiden. She told me where to go next and marked it on my map.